Dogs Rescued From Cliff In Colorado In Unique Way

Last month two hikers, a man and woman, from Broomfield, Colorado and their dogs found
themselves in quite a quandary while hiking Mount Quandary. After
reaching the summit of the "fourteener" 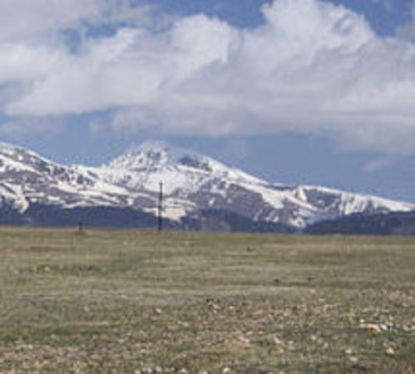 Mount Quandary (Photo by David Herrera/Creative Commons via Wikimedia)(14-thousand-foot peak), they took a wrong turn during their descent and
ended up stuck on a 200-foot cliff. To make matter's worse, the couple's
back pack with their food, water and other gear fell over the cliff.

As a storm started moving in the couple quickly built a rock shelter and the four huddled together for warmth overnight. The next morning the man was able to make his way down the mountain to their vehicle to call for help.

Members of the Summit County Rescue Group responded. The woman was able to walk down the mountain herself, but the dogs were not able to go with her. The rescuers were momentarily baffled as to how to rescue the dogs. Then two of the rescuers emptied their back packs and stowed the dogs in the packs instead.

Due to their ingenuity and quick thinking everyone made it down the mountain safely that day.

Dogs
News Stories
Rescue
Bite Me: The Top 10 Weird & Bizarre Pet Chew Toys
QR Codes and Business Cards: A Smart Combination for Your Pet Business
PetsLady's Pick: Funny Picnic Dog Of The Day
You Do A Service For Your Country And Your Dog Is Proud To Show It!
Comments