A North Korean man, Jeong Pyong-bong, claims his dog recently gave birth to a kitten.  The new mom's litter included white and tan puppies as well as a white kitten with brown tabby patches.  The dog's owner said he thought it was a puppy  that just resembled a kitten, but that was until he heard it meow.  The meow confirmed the newborn was in fact a kitten. 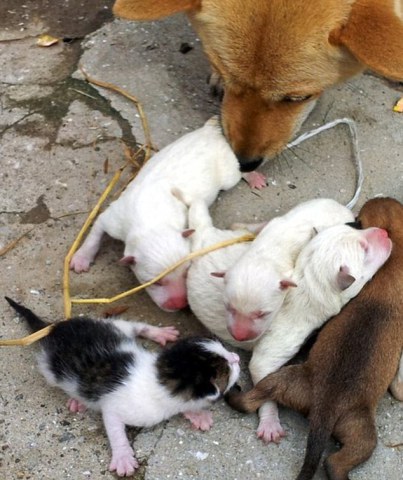 This kitten tries to figure out what he is doing in a litter of puppies!

But how could this be true you ask?  Pyong-bong explained that his promiscuous pup had stayed out late a night or two without coming home.  He believes a male alley cat is to blame for keeping his doggy daughter out all night & for the mystery kitten.  He told hews sources, "This is a miracle!"

The Korean dog owner's miracle is more like a myth according to the scientific world.  A professor from Chonnam National University's College of Veterinary Science explained that a dog giving birth to a cat is genetically impossible.  Son Chang-ho said, "The number and trait of chromosomes in canines and felines are completely different."

Some skeptics are saying this was a hoax in an effort to get some publicity.  A similar story came out in China a few years ago about another dog giving birth to a cat.  Another case came out of Brazil about a cat who gave birth to two dogs. 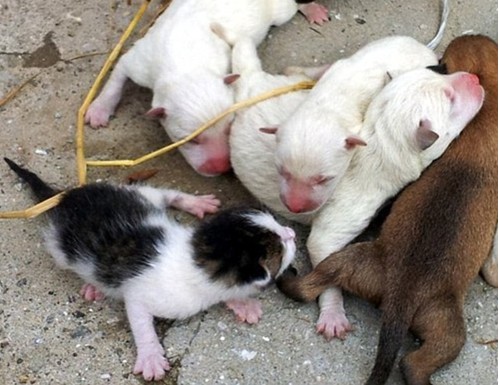 Could the kitten and puppies be siblings?

Despite the story being genetically impossible, neighbors are visiting from all around to meet the dog who gave birth to a kitten.  Maybe the next visitor will be a mama cat looking to take its spawn back.  Or perhaps the new mommy dog is doing a good deed by adopting a kitten who has lost its mother.  Whatever the case, the 63 year old dog lover is sticking to his story that his dog gave birth to that kitten.