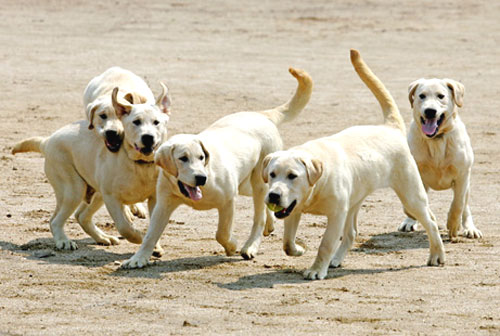 These puppies are really sweet-looking, aren't they? According to the South Korean Customs Service, the seven Labs you see here are all very good-natured dogs, highly trainable, and exceptionally good at sniffing out drugs. They should be; they've been cloned from Korea's best drug sniffing dog.

Seoul National University scientists, if you remember, created what is believed to be the world's first cloned dog, an Afghan hound named Snuppy, in 2005. The same group of scientists was responsible 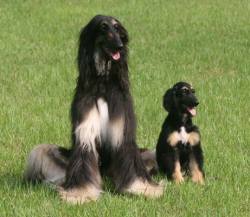 for this most recent cloning of the drug sniffing Labrador retrievers, who are now being trained by the Korea Customs Service. The cloned Labs, however, have not been named individually. I guess because they all look alike, they all have the same name - Toppy - the "to" from tomorrow and the "ppy" from puppy.

Although the Associated Press (AP) reports that it cost the Seoul National University about $100,000 to clone each of the seven Labs, the expense may be worth it if the dogs turn out to be better qualified than the un-cloned dogs. Un-cloned dogs are trained for the drug sniffing jobs at a cost of $40,000 per dog, even though only three of ten dogs are actually capable of doing the job after training concludes.

Cloning technologies are being refined rapidly. You can now clone the perfect show dog, the perfect jumper, the perfect pet, and the perfect working dog. Robots are replacing humans in so many industries. Will the good old natural-born dog soon be made redundant?

Update: July 22, 2009.  Six of the seven cloned dogs completed their training successfully and were recently sent to work at four customs stations in South Korea.  The seventh dog was injured during the training and was withdrawn. See short video at BBC News.

AP via National Geographic.com
If you would like to see the drug sniffers in action, visit this video .