Dogs And Cheetahs: A Match Made In Heaven?

Almost everyone gets a case of the "Awwwwwwws" when they see members of
mismatched animal species become attached to one another. Now zoos and
animals parks are creating these relationships by supplying 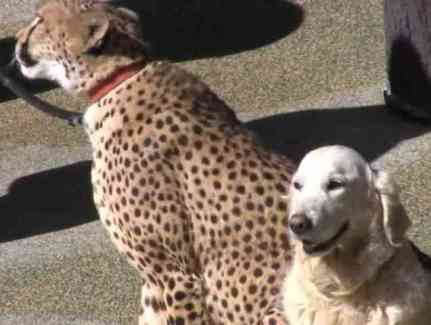 Cheetah And Dog Are Best Friends At The Zoo (You Tube Image)companion
dogs to wild species to help keep them calm and relaxed. Case in point is the cheetahs with their own dog friends to help them become better
breeders.

Most of the cheetahs in these captive venues tend to be viewed as poor candidates for breeding since they rarely relate well to other cheetahs. They do take well to companion dogs and will follow their example for behavioral cues. The cheetahs and dogs also play and sleep together.  The only thing they don't do together is eat - because neither is above trying to steal the other's food, and because their diets are quite different. The dogs also have play dates with other dogs and with humans to keep them happy and socialized.

The dogs and cheetahs are first introduced when they are about three months old so that they will bond closely. The dogs are usually adopted from animal shelters to take on this important duty of affection. In the relationship the dog is dominant, but the dog also needs to have a strong interest in being a buddy to the cat.

The dogs come in all sizes. At the San Diego Zoo Safari Park a small 40-lb. dog named Hopper is teamed up with Amara, the toughest cheetah female in the place. So it is true that size doesn't matter.

The zoo received their first pair of cheetahs back in 1981. They were given on the condition that the zoo provide the cats with dogs because that is what they were used to. At this point no one knows how the idea to pair the two species together came about.

A century ago there were an estimated 100,000 cheetahs in the wild. Now there are less than 12,000. In many countries where the cheetah had existed it is now extinct. While captive efforts to save the cheetah continue, experts are concerned that there will soon be no place to return them to as their natural habitats are being swallowed up by increased development and by poachers killing the animals for their fur. 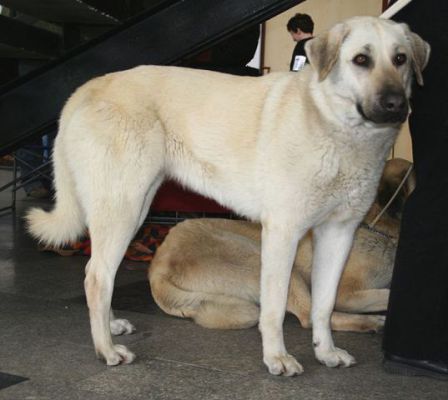 Anatolian Sheherd (Photo by Pleple2000/Creative Commons via Wikimedia)Farmers in areas with cheetahs have begun using a special breed of dog -- Anatolian shepherds. The dogs are very successful at keeping the big cats away from livestock. As such, the farmers no longer have the need to be killing the cats. The result has been an increase in cheetah numbers in the wild over the last 30 years.

Cheetahs are not social animals. They live independently in the wild and rarely hang out with other cheetahs. It is a dynamic that plays into the difficulty of breeding the animals.

Not all zoos use companion dogs with their cheetahs. The St. Louis Zoo does not use dogs, but have managed to produce 30 cubs.