Dogs Helping The ‘Fear Of Flying’ Aviophobes At Airports 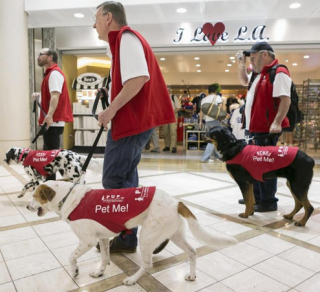 It might be the 21st Century, but according a few reputable sources, there is approximately 30-percent of us who continue to fear flying the friendly skies. With instances of plane crashes and those that have gone MIA in recent years, the 'clenched fist’ crowd is here to tell you, the idea of boarding a plane is disconcerting to some and utterly terrifying for others.

Flying is Safe or a Myth?

It seems that while flying remains the safest form of transport, the atavistic brains of some are still resistant to accepting this type of positive data. For the 30-percenters, the fear of flying comes down to not being able to comprehend how anything other than dark magic could possibly allow a 500-ton metal contraption to become airborne.

Lassie to the Rescue

For the timid of heart, perhaps the TV show ‘Lassie’ might help calm your nerves? For those who remember, this canine was considered the world’s best friend for decades. Not only was she intelligent, but also intuitive enough to sense the fear displayed by humans in peril. In response, she was the first to comfort and assure them that help would be on the way.

Taking Lassie’s lead, comfort dogs have served many altruistic purposes in recent years. Blind individuals, veterans returning from the wars, cities after tragedies like 9/11 and countless other stress-related scenarios are just a few of the cases served by dogs with a sixth sense for taking care of the afflicted.

So, it seemed like a perfect fit when someone came up with the bright idea to send comfort dogs into airport terminals where anxious flyers could hug and pet them.

Approximately 30 U.S. airports already have comfort dogs available -- and one airline has begun to provide these dogs as well. For the holidays this past December, United Airlines expanded its annual United Paws program from two airports to seven in Chicago, Cleveland, Denver, Houston, Los Angeles, Newark and Washington, D.C., where more than 200 comfort dogs soothed thousands of travelers.

“United Paws is a wonderful program that comes at just the right time for some holiday travelers who may be experiencing a bit of anxiety or stress,” said Dr. Walter Woolf, a veterinary consultant. “Research shows that just petting a dog releases oxytocin, the hormone associated with bonding and affection, and also decreases levels of stress, helps us breathe easier and lowers our blood pressure.”

Los Angeles International Airport (LAX) was one of the first airports to launch a comfort dogs program. PUP (Pets Unstressing Passengers) has been in existence there since April 15, 2013. (Yes, it was intentionally started on Tax Day, one of the most stressful days of the year.)

“When you walk in with the dogs, you feel the stress level drop immediately,” Heidi Huebner, director of volunteers at LAX, told CBS Los Angeles at the time. “People start smiling, people start talking to each other, they’re taking pictures, they’re hugging the dogs.”

Comfort dogs must be specially trained and, in some airports, certified by Therapy Dogs International (TDI), which tests them for temperament, obedience and the ability to be hugged and petted amid the chaos of an airport terminal. Any size or breed of dog is eligible, from rat terriers to rottweilers.