The Dogphone – Throwing You A Bone During A Natural Disaster

You don’t know him – but this dog might just save your life.

Imagine this – a disaster hits, destroying your home, ruining everything you own and sending you and your family scattering for cover, far from the meager comforts of a city left in ashes.

Your cell phone is dead and broken, and all land lines in the area have been down for weeks. You’ve heard that the government is sending in assistance, but the best you’ve seen is a city cop who was clearly not in his right mind – at least, not if his shredded uniform and guttural cries were any indication.

You’re trapped and alone, in a place partially familiar to you but without any real sense of where to go or how to get there.

Suddenly, Fido comes trotting up. Maybe he’s a white and orange collie, or a black and grey husky, but he’s friendly, and he’s got a strange orange uniform on. Upon closer inspection, you note that the thing has a keyboard and small screen, plus a big green button with a checkmark.

The future has arrived, and it’s been combined with an age-old rescue technology – the dog.

Here’s how this retro-future gadgetry works. Each of these specially trained dogs is outfitted with an orange “messenger vest”, which has the ability to record video messages from stranded or injured victims of a crisis.

Every morning, the dogs are set loose from a central location to roam the countryside and find anyone in need of help. When the dog finds a refugee, it’s trained to sit, and the vest’s technology actives. When the green message button is pressed, a time stamp is placed on the video and a GPS unit in the backpack takes a “geo-snapshot” of the location. 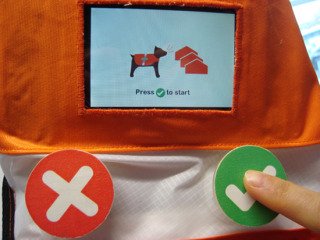 The dog is trained to stay only a brief while with each trapped soul, and then move on to the next. At the end of the day, the dog returns to the dispatch location so that the videos can be downloaded and viewed, and rescue parties sent out to the locations cached in the GPS.

It’s interesting that in a world so technologically-minded, we’re still looking backward to take advantage of tried-and-true technology. Sure, we know that people are trapped out there in the wild after a disaster, but good luck finding them, even with all of our fancy technology and new-fangled gadgetry. Without the boon of Star-Trek like life sign detectors, we still have to rely on the noses, ears and eyes of our furry friends, but this dogphone technology gives augmentation to their abilities, and rescue workers a leg up.

It might not be St. Bernard, and you can’t drink what he’s carrying, but after a natural disaster, this dog might just be the best thing you ever see.

Clothing and Accessories
Dogs
Gadgets and Electronics
Pet Safety
Pets
Technology
Ease Your Pet's Anxiety With The Thundershirt
The 10 Best Right Wing T-Shirts For Dogs
Pet Outfit Of The Week: The Gucci Dog Baseball Cap
Get A Better Glow With Vedante Pet Collars And Leashes
Comments