For many years, rightly or wrongly, the city of Boulder, Colorado has
been known as one of the most dog-friendly cities in the United States.
One of the things that helped the city gain this reputation is its
allowing people to walk their dogs off-leash on certain specified
open-space areas. This week the city began rethinking this liberty. 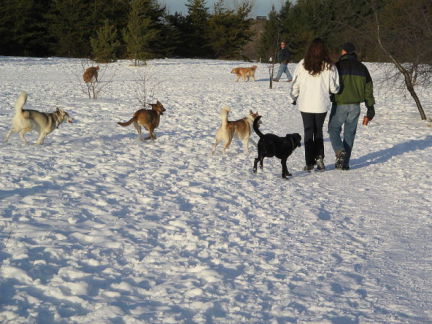 The caveat for owners being able to walk their dogs off-leash is that the dogs must be under voice and sight control of their owners. These dogs are required to be wearing a green tag that indicates that the owner understands the rules of the program.

However, in a recent study, more than half the dogs were noted as not responding to their owner's voice command. Off-leash dogs get into altercations with one another, have been known to attack humans, and will pursue the wildlife that abounds on Boulder open-space.

In a joint session between the City Council, Boulder Open Space and Mountain Parks Board of Trustees on Tuesday evening possible fixes to the program were discussed. Ideas proposed included increasing fines for lack of compliance, requiring dog owners to take a class before acquiring a green tag, and loss of the green tag for dogs displaying aggressive behavior or chasing wildlife.

There are many people out there whose dogs should not have green tags in the first place. They city also need to find a way to target these people and get them back to using a leash. One of the problems here is many people believing that their dogs are sufficiently voice and sight trained when they are not.

Since this session was merely a "study" session, no action was decided upon and no vote was taken.

Dogs
News Stories
Pet Safety
Can This Be Used To Generate Energy? The Animal Video Of The Day!!!