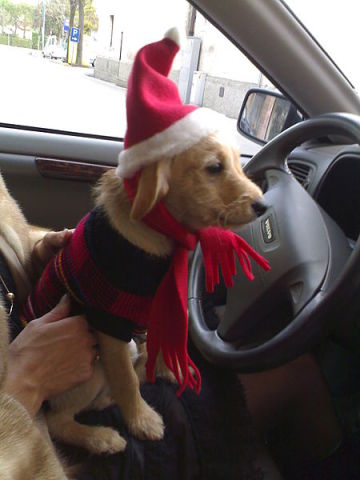 Dog Carried Away With Christmas (Photo by Maekia/Wikimedia)
extreme sport. Back in March he got carried away with the chewing and
ate a scarf belonging to his owner.

After surgery to remove the scarf, Charlie's owner figured that it was something that would never happen again. Indeed, there was nothing in Charlie's subsequent behavior to suggest a repeat of the stunt, even though he still enjoyed chewing on household objects from time to time.

Then one day recently Charlie's owner noticed bits of wire appearing in his poop. A quick trip to the vet and some x-rays immediately brought the problem to light -- literally. There were the tangled remains of Christmas lights that he had somehow managed to wolf down.

Charlie was immediately rushed into emergency surgery to save his life. The veterinarians said that, while they have seen dogs swallow a great many things, this was a first time for Christmas lights.

Charlie's owner is just glad to have the light of her life home and recovered from the shocking ordeal. Since then she has made sure the "Charlie-proof" the house.