Dog Uncovers Fortune In Ambergris On The Beach

If there is one certain thing about dogs it is their love of a really
bad smell. It is just this trait in Madge the dog that led Ken Wilman to
discover what may potentially be a small fortune in "whale vomit," or
ambergris. The 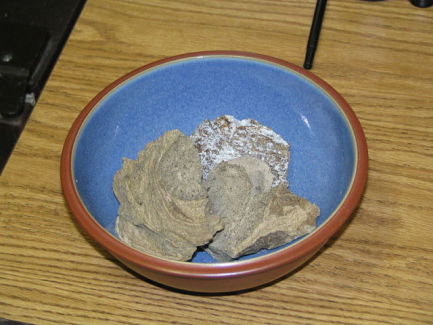 Small Chunks of Ambergris (Photo by Peter Kaminski/Creative Commons via Wikimedia)waxy substance expelled by the digestive system of sperm
whales is used in the production of fragrances such as Chanel No. 5.

Wilman was walking his boxer, Madge, along Morecambe Beach in Lancashire, England when she discovered the stinky yellow mass in the sand. Wilman couldn't understand why she was so interested in something that smelled so bad. He didn't know what the mass was and so he left it behind on the beach. Once he was back home he looked it up on the Internet. Discovering the value of what Madge had found sent him rushing back to the beach to collect it.

Willman injured his back in a motorcycle accident and has been unable to work. An influx of cash would be most welcome to him and Madge right now.

The British government is warning all would-be fortune hunters to use extreme caution when hitting the beach. Areas where the tide comes in suddenly or where there is quicksand can create dangerous conditions and even those experienced with these areas can get caught off-guard.