Dog Rescued With Kitten She Rescued

When an animal control officer responded to a call earlier this year about a dog barking in a
ravine they thought that the poor pup had become trapped down there.
Reality turned out to be much different. The little Shih Tzu-mix 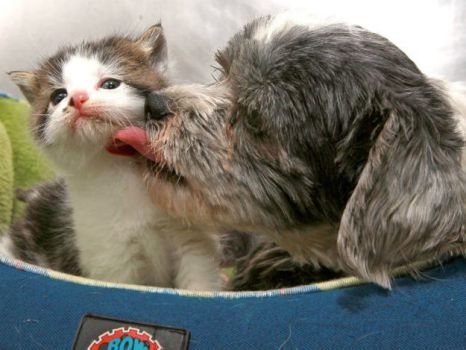 A Dog and her Kitten (Photo via Pinterest) was indeed
calling for help, but not just for herself but for the tiny kitten she
had rescued and was suckling at her own teats. The dog could have left
to save herself, but her mother's heart wouldn't let her leave her
kitten behind.

The dog was curled up in briars and brambles when Officer Smith climbed down to her. When she saw the kitten nursing at the dog's side she was shocked and surprised for just a moment before a big case of the awwws set in.

When Smith got the moggy and the doggy to the shelter the staff had the same reaction. They were totally taken with the loving care that the dog provided the kitten. It is estimated that the dog was five years old and the kitten just five weeks old. 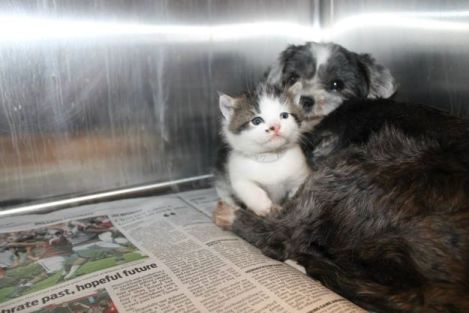 A Dog and her Kitten (Photo via Pinterest)The pair was kept together in a private cage with the dog still acting as mother. If the kitten tried to stray too far her mom would grab her by the scruff of her neck and pull her back to the little bed they shared.

Jessica Cwynar, director of the shelter, said that a surge of hormones most likely caused the milk production in the dog. It wasn't enough to really keep the kitten going though and volunteers stepped in to help out with bottle feeding and a bit of conditioning to humans.

The dog had a collar and her coat was in good condition so they had hoped that an owner would come forward to claim her. Eventually the pair was sent to a foster home -- together, of course.