A Dog Is The Patron Saint Of Infants?

So, is it really possible for a dog to become a real, certified Catholic
saint? The short answer is no. The reality behind this is a bit more
complicated and lies far back in the mists of time and is shrouded in
more legend than fact. The long answer is that for centuries a large
group of people believed that a greyhound was a real saint and often
prayed to him for help with a variety of issues. 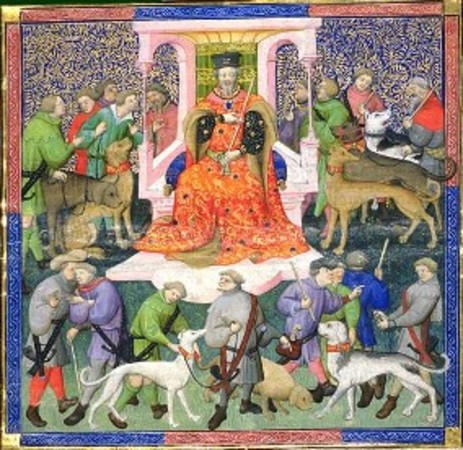 The legend dates back to the 13th century tale of a French greyhound by the name of Guinefort. The dog was owned by a knight or nobleman who left his only child in the care of the dog while he went off to hunt. The story tends to gloss over the fact that there seemed to be no mother or faithful servant to properly care for the child in the father's absence.

At any rate, the nobleman returns home to find the castle in total disarray with blood everywhere, including on the dog. Enraged, he assumes that the dog has betrayed him, draws his sword, and runs the poor pooch through. It is only then that he finds the child alive and well under the upturned cradle and the body of a dead viper lying nearby. To his horror he realizes that he has mistakenly killed the heroic hound that loyally fought to save his progeny. 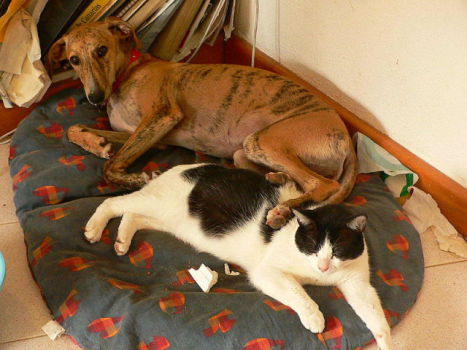 Greyhounds are loving dogs, even when sharing a bed with a cat. (Photo by Merianne Perdomo/Creative Commons via Wikimedia)The man then erected a shrine to the dog. In some versions of the story the dog is dropped down a well and the shrine is built over it. This seems unlikely unless the well was already foul or dry. Water is too valuable a resource to waste even on a hero.

French peasants from all over the region heard the tale of the faithful and heroic greyhound and began to make pilgrimages to the shrine. Before long news began to spread of babies being healed by the shrine. Among the locals the canine became widely known as a saint for protecting infants.

Basically, this is one of those legends that exist in many forms in many cultures. There is no evidence that this actually happened other than the anecdotal. There apparently was a shrine to a dog in France that was alleged to have been the grave site of St. Guinefort.

The Church eventually got wind of a supposed saint in France and sent someone out to investigate. When he discovered that the bones in the shrine were that of a dog and not a human he ordered the shrine destroyed. The locals were not put off so easily and after he left they rebuilt the shrine, still convinced in their belief that the dog was indeed a saint. It was a belief that persisted well into the 20th century despite all denials and disclaimers by the church to the contrary.

The process of canonization (becoming a saint) is very heavily codified by the church. One of the most certain qualifications for one to be a saint is that one actually be human.

Despite not being qualified for true sainthood, it is certain that there have been many animals throughout history who have acted in a saintly manner towards humans and each other. If there is any justice in the world, perhaps they will one day be considered eligible. In the meantime (blasphemy warning here!) it up to each of us to make the decision for ourselves (especially if we aren't Catholic).

Dogs Stay Inside With The Innovative Dog Escape Preventer