Dog owners in Wales have been shocked to discover that someone with a
vengeance against dogs has been targeting their dogs for death at a dog
park. Police in Abergavenny, South Wales put out a warning to all dog 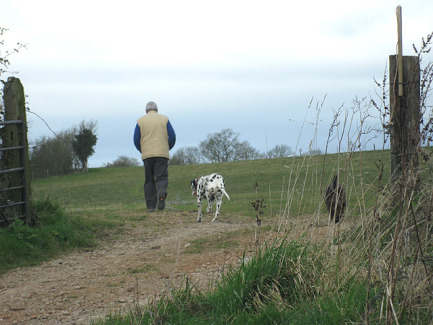 Walking the Dogs (Photo by Pauline Eccles/Creative Commons via Wikimedia)owners last week to take extra precautions with their dogs in dog parks
after cooked sausages with nails in them were found littering one dog
park.

Whoever placed the sausages in the park was intent on not only causing harm to the dogs, but a slow and painful death. Each of the small cocktail sausages that the perpetrator left in the park had nine nails stuck inside. Any dogs eating the sausages would have suffered egregious harm. One owner who was among the first to notice the sausages collected approximately 40 of the offending "treats."

One dog walker pulled his dog back when he noticed something metal shining in the object his dog was sniffing.

Fortunately, there have been no reports of any dogs getting sick from eating the sausages. Police are concerned about the sausages being left in the parks where they could also be picked up easily by small children.

Another dog owner commented that he understands that not everyone likes dogs, but that this does seem to be a very extreme reaction.

The Story Of A Noble Camper