Perhaps it is God getting back at the world for stripping Lance Armstrong
of his Tour de France titles, but the famed bicycle race is being
plagued with strange problems this year. First it was a bus that had
managed to lodge itself on a gantry at the finish line of Stage 1. Then
yesterday a small dog thought it was a good time to get into the race
near the end of Stage 2. 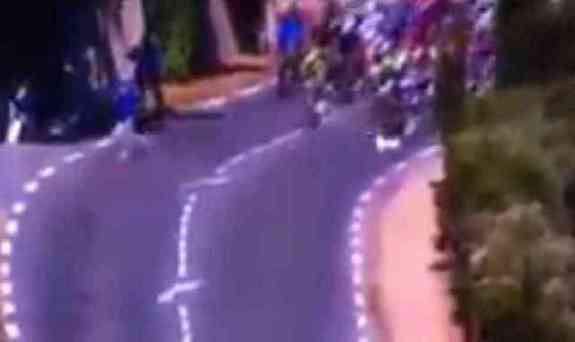 The dog is that little white spot in the photo. Somehow he managed to escape from his owner and dash out onto the race course. He ran back and forth several times and his owner hurried to try to catch him before realizing that the bicyclists were almost upon him. He pulled back and ultimately the pooch in peril also managed to dart off at the last minute, narrowly escaping with his life.

Had he not gotten out of the way the dog would have caused a major collision. While he came in after the leaders, he began his frolic just before the main pack (the peloton) came barreling down the road.

Other than a whole lot of extra adrenalin in the area everyone came through without a scratch. The hapless hound no doubt got a big hug and then a good scolding from his owner.