Dog Dies After Forgotten In Hairdryer

Last year in Essex, England, a Lhasa Apso dog named Dusty had to be
euthanized after suffering horrible burns due to having been forgotten
in a hair dryer at the groomers when the attendant left to answer the 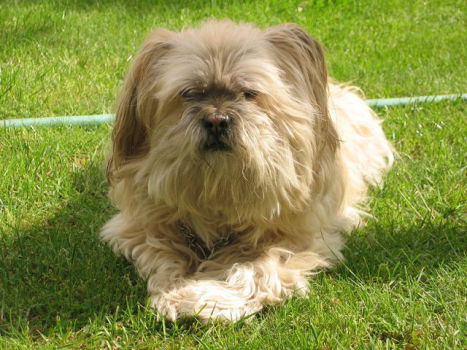 Lhasa Apso (Photo by Arnold C/Creative Commons via Wikimedia)phone. When the owner came to pick up Dusty she was told that she needed
to apply a bit of ointment to a "small burn" that the dog had received.

In reality the burns were extensive and severe, and Dusty was suffering from shock. He had to be rushed to the veterinarian where his condition deteriorated over the next few days. Eventually the owner had to make the painful decision to have Dusty put to sleep.

This month the owner of the grooming salon was ordered to pay £1,000 in fines and do 120 hours of community service. Dusty's owners were awarded only £250 for their devastating loss.

Due to this and other incidents, the Royal Society for the Prevention of Cruelty to Animals is calling for a requirement that all groomers must be properly trained and licensed. It is hoped that this would be a step in the right direction to reduce the suffering of animals and their owners by creating a regulated standard of care for animals in the hands of groomers.

Before leaving their pet with a groomer, it is recommended that the pet owner visit the facility to determine that the facility appears safe, clean, and appropriately staffed with qualified employees.

PetsLady's Pick: Funny Flooded Horse And Rider Of The Day