Dog Hitches Ride On Ambulance To Stay With Owner

Dogs are known for their loyalty to their humans and every now and then
they go above and beyond to prove this trait. A beagle-mix named Buddy
in Mason, Texas, took loyalty to a whole new level a few weeks ago when
his owner was loaded into an ambulance to be taken to the hospital. Part
way through the trip it was discovered that Buddy was riding on the
back of the ambulance to stay with his human. 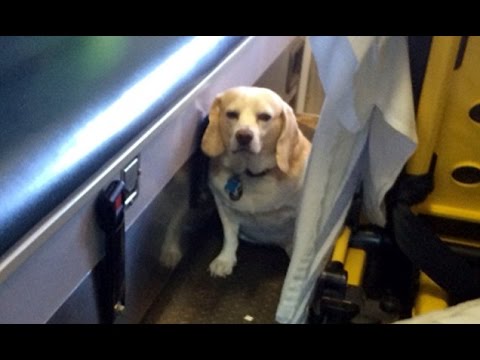 Buddy in the Ambulance (You Tube Image)

When 85-year-old J.R. Nicholson was complaining of dizziness last month, an ambulance came out to his Texas ranch to transport him to the hospital. It was only when the ambulance was flagged down by a passing motorist 15-20 miles into the trip that the medics got out of the ambulance to see what the problem was that they found that Buddy had been clinging precariously to the back of the ambulance the whole way. The trip had included twists, hills, a bridge, and a highway. Surprisingly he was uninjured. The medics couldn't leave Buddy there on his own, so they put him inside the ambulance and took him along to the hospital.

Ranch hand Brian Wright had stayed behind at the ranch to close up and had not been able to find Buddy before he left, but thought nothing of it since the dog enjoyed the run of the ranch and would undoubtedly come home when he was done checking things out. He was floored when he got to the hospital and was told that the dog was there.

Wright said that Buddy likes to take tractor rides on the ranch. Perhaps that helped lead the dog into thinking he could go along with Nicholson. Nicholson was impressed with the actions of the dog. He had only had Buddy for four months after his daughter adopted the dog for him at a local shelter. Buddy has definitely earned himself a permanent place in the family.