Alvin is used to doing charity work. He usually visits hospitals and
schools, and works with autistic children. For the three
Christmases he has also tried his paw at ringing bells to raise money
for The Salvation Army. He certainly causes more people to stop than the
usual human standing around ringing a bell. Alvin drew quite a crowd at
Walmart in Richmond, Indiana, on Friday with his bell ringing skills. 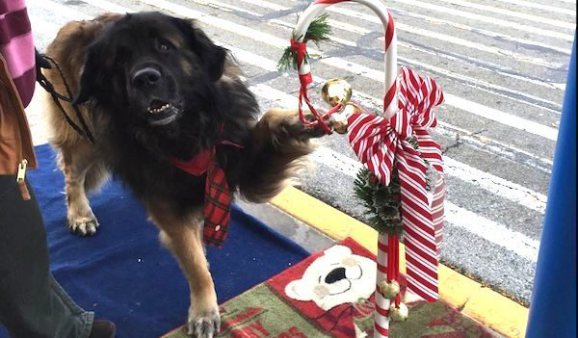 The caring canine is a four-year-old Leonberger, a large mountain dog named for a city in Germany. The breed is known for being loving, kind, loyal, intelligent, and playful. The Leonberger was first bred in the 1830s and became a recognized breed in the 1840s. The breed was nearly wiped out during the two world wars but made a resurgence in the late 20th century.

Alvin is not the only animal that has volunteered to help The Salvation Army stump for cash during the season of giving. Other dogs and even miniature horses have been trained to ring bells and charm the public into opening their wallets to share their wealth with those less fortunate.

He is a trained therapy dog and lives with his human mom and dad, Julia and Steve Roberts. They say that it took all of about three minutes to teach Alvin to ring the bells. They keep him motivated with tasty treats of venison, cheese, cookies, and turkey. One of the shoppers even bought Alvin a whole package of dog treats as a Christmas present. 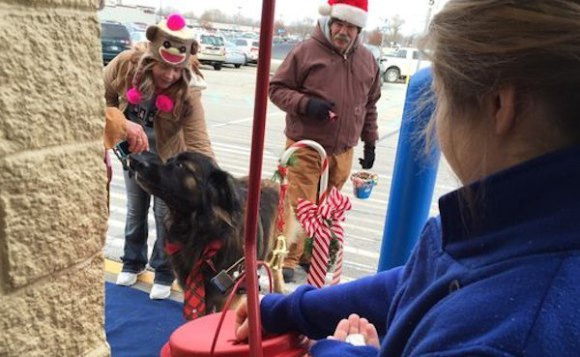 When Alvin is not collecting for charity he works at nursing homes and hospitals to cheer up the patients. He also works with schools on programs that range from reading and pet care to safety and anti-bullying. In addition he helps reach autistic children to help bring them out of their insular worlds.

Last year Alvin rang the bells for about 15 hours and brought in more than $100 an hour for his efforts. You don't need to worry about him being over worked either. His stint at Walmart last Friday was just two hours long and he is well rewarded with treats, hugs, and eventually a nap.

If you want to get in on the action and donate to Alvin's Red Kettle, click here, and help The Salvation Army help people in need.

Give The Gift Of Microbes
Comments