Remember when those irreverent 'Jersey Shore' kids were the reality rage on TV as they ushered in memes, the likes of "smooshing," "The Situation" and "GTL"--short for Gym, Tan & Laundry? Yep, with millions of fans the world over tuning in weekly, they captured the zeitgeist of the moment and received more than their 15-minutes of fame.

So when a new study released this week by Scientific Reports stated that certain whales actually tan like humans, I was curious if any of the Jersey Shore whales were just as attracted to absorbing solar ultraviolet radiation as those Jersey Shore guidos and guidettes?

While New Jersey's shore isn't home to all species of whales, the Humpback whales have been spotted along the New Jersey Shore coastlines near the Bayhead and Point Pleasant shore points, as evidenced in this YouTube video.

In the study, they concluded that like humans, the UV damage and changes in pigment coloration was similar. And Blue Whales were identified as the one species of whale that experienced a lot of tanning. Touted as the "biggest creatures" ever to have lived on the planet, these whales respond to the sun by increasing the amount of pigment in their skin, just like humans. However, their migratory patterns has them in Canada and Cape Cod during the summer and the Gulf of Mexico and The Caribbean during the winter - bypassing the Jersey Shore.

According to the National Oceanographic and Atmospheric Administration, the majority of whales that reside near the Jersey Shore and the north Atlantic Ocean are Pilot Whales (both long and short-finned). They are deeply pigmented animals making them much more resistant to sun damage, with the lowest prevalence of sunburn lesions.

The Fin Whales are the Blue Whale’s darker-skinned, stay-at-home cousins who display a reduced ability to change the level of melanin in their skin. So like the Guidos and Guidettes of the Jersey Shore, these whales are genetically geared to appear tanned year-round, by-passing the sun-burnt red-as-a-lobster stage that comes from basking in the sun during the summer.

Upon further research, I could not prove however that these whales have ever been known to go to the Gym, nor clean their laundry at the laundromat. And there was no evidence to support Snooki's claim as to why the Atlantic Ocean is salty??? 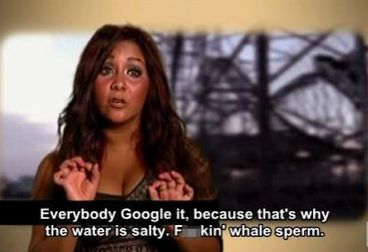 Stars. Both are very social in nature and are often seen rubbing up against each other in amorous ways. Also the Urban Dictionary lists "man-whaling" as a verb referring to when a woman experiences her monthly menstruation cycle. It gets its name based on the premise that it's during that time of the month a woman feels both like a man and a whale.

Aside from those similarities, the only other correlation I was able to draw was reference to New Jersey's portly Governor, and the number of times the guidettes needed help when their drunken stupors banked them up on the beach. 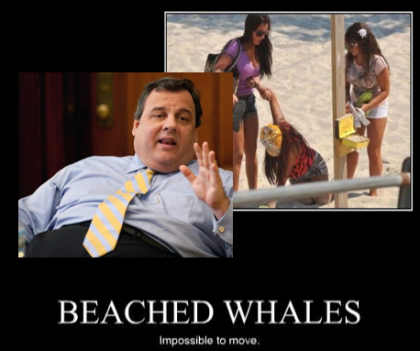 Animal Videos of the Day
Best Places To See Animals
Fun Stories
Funny
News Stories
Be Glad Humans Don't Stress Out Like This! The Animal Video Of The Day!!!

What Is That Thing? The "GAH!!!!" Animal Video Of The Day!!!
Sad Farewell Visit From Giraffe At Friend's Deathbed [Video]
Homeless Can House Their Dogs In San Francisco’s New Shelters
Comments