A Dingo Ate My Sleeping Bag!

When 13-year-old Rebecca Robinson was woken up in the middle of the
night earlier this week, she felt something wasn't quite right. There
was movement, like she was being dragged, even though she wasn't moving.
When she looked she saw a dingo chewing and pulling on her sleeping
bag, apparently getting it off of her. When she screamed the animal ran off. 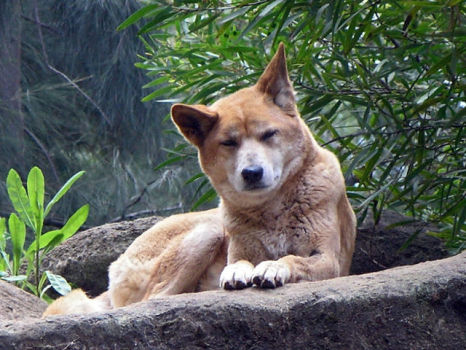 The incident was reported just weeks after a fourth investigation into Australia's most famous dingo attack finally exonerated Lindy Chamberlain, who had been convicted of murdering her nine-week-old daughter, Azaria, after claiming that the infant had been taken and eaten by one of the wild dogs. The Chamberlain family had been camping near Uluru (Ayer's Rock) when the tragedy occurred. At the time, in 1980, it had been believed that dingoes were not dangerous and would attack only when provoked. Chamberlain spent three years in prison before being released after scraps of the baby's clothing was found neat a dingo den. The event spawned a movie starring Meryl Streep.

Rebecca had been sleeping on a mattress under a caravan canopy at the Aurora Kakadu lodge, about 150 miles from the city of Darwin. Her mother was told afterward that this was the fourth such incident at the lodge this year -- an unusually high number.

Dingoes are a wild species of dog unique to the continent of Australia. Their natural habitat ranges from deserts to grasslands where they live in dens. They are Australia's largest land predator and voracious carnivores. They are viewed as pests by ranchers whose efforts to control the effects on their livestock is usually at odds with conservation efforts.

It is not yet known why there has been an increase in encounters between dingoes and humans.

Dogs And Digestive Problems, What You Need To Know
PetsLady's Pick: Funny Turkey Dog Of The Day