Dindim The Penguin Knows There’s No Place Like Home 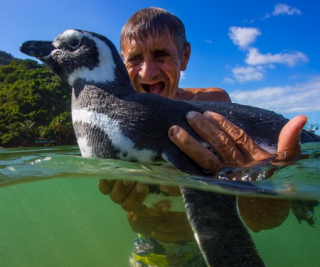 Like his fictional counterpart Dorothy in the Wizard of Oz, “Dindim the Penguin” seems be of the inclination “there’s no place like home.” Except the hometown in this case is not Kansas. In fact, it’s not even in North America. No, this Magellanic Bird returns home annually to visit an old friend who resides in the southern hemisphere on Proveta Beach in Rio de Janeiro State, Brazil.

Brazilian Joao Pereira de Souza is the catalyst at the heart of this story. In May 2011, a penguin was discovered by de Souza in an oil spill where he was totally immobilized. The 71-year-old retired mason was able to remove the sticky residue from the bird’s feathers, while providing him with sardines for nourishment.

It was during this convalescent period that de Souza’s grandson was the one to name the penguin. Since the toddler couldn’t articulate the word ‘pinguim’ (which is Portuguese for penguin], he started calling him “Dindim,” to the delight of hiis grandfater, and which ended up sticking.

When Dindim was fully recuperated, de Souza released the flightless bird back into the sea, never expecting to see him again. But to his amazement, it was only a short four months later when Dindim returned not only to the island but to the man that saved his life. 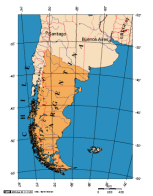 Now, Dindim has devised a travel routine where he spends approximately eight months with de Souza and the rest of the year somewhere off the coast of Argentina and Chile where  Magellanic penguins are known to breed. However the exact location has never been confirmed, because to date no one has actually ever tracked Dindim’s journeys when he leaves Brazil.

“No one else is allowed to touch him. He pecks them if they do. He lays on my lap, lets me give him showers, allows me to feed him sardines and to pick him up.” 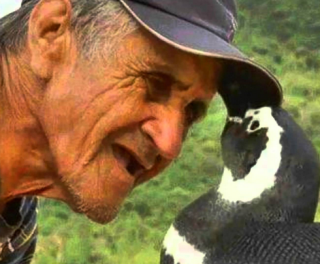 His now defacto father-figure believes Dindim might actually think of him as a penguin and part of his biological family. “When he sees me, he wags his tail like a dog and honks with delight.”

"He arrives in June and leaves to go home in February, and every year he becomes more affectionate, as he appears even happier to see me," adds de Souza.

Now that’s about as heartwarming a tale as you’ll ever hear. Here’s hoping Joao Pereira de Souza and Dindim have many, many more reunions for years to come . . . because after all, there REALLY is no place like home!