On the heels of the People for the Ethical Treatment of Animals (PETA) roaring back at Katy Perry's recent top 40 hit video "Roar" for animal mistreatment, the activist group is once again up in arms against the entertainment industry.  This time they have focused their crosshairs on Leonardo DiCaprio's role in holiday blockbuster, "The Wolf of Wall Street," featuring a chimpanzee in a co-starring role.

W.C. Fields. Fields' know when he uttered his now famous warning: "never work with animals or children," that decades later he might have been commended by PETA, an organization that finds fault with the use of animals in film projects.

Ironically, like Katy Perry who had previously been lauded by activist organizations for maintaining a vegan diet, DiCaprio has been known as an active environmentalist behind a lot of charitable endeavors to save the earth.

PETA primatologist Julia Gallucci reported recently: "Someone as committed to environmental concerns as Leonardo DiCaprio should know better than to support the well-documented cruelty involved in using great apes for entertainment. "PETA hopes the next time Leo receives a script with an ape actor in it, he'll remember that these sensitive a 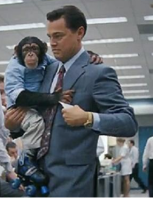 Chance & Wolf of Wall Street!nimals are stolen from their mothers at birth and subjected to physical abuse - and he'll demand a rewrite."

The scenes in question features DiCaprio first walking hand-in-hand with
the chimpanzee named Chance through a raucous stockbroker's office, and then seen later picking him up. While Chance is suited up with roller skates, the scene
appears to be very harmless and non-threatening.

Apparently Chance is owned by the Rosaire Family - a group which animal rights advocates state are "notorious for operating a traveling circus with an exploitative show featuring chimpanzees riding horses and doing other unnatural tricks."

When DiCaprio refused to comment on PETA's harsh critique, PETA proceeded to post an online petition asking the actor to never work with animal actors again. To read the full "Wolf of Wall Street" petition, head over to PETA's official website.

It's curious to me that whil 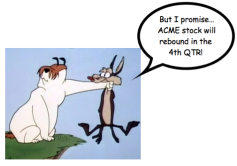 e PETA has taken such a hard line in support of monkees' rights, that they never touched on the mistreatment of wolves in this movie. After all, describing wolves as analogous to the criminal activities of stock brokers is paramount to defamation of character, don't you think? Coyotes, maybe? But not wolves!

The Critter Of The Month: King Kong

No Trespassing: Monkey Business Not Open To Beaufortonians
Comments