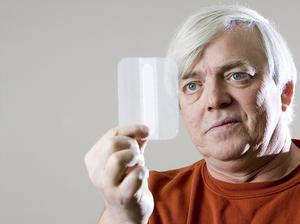 Image: Adam Vogler/The Examiner The inventor of the famous Neuticles (plastic testicles for dogs that made Number 2 on my list of dumbest pet products) has come out with his second dog prosthesis: PermaStay Ear Implants for dogs.  Oh, they're not about helping your dog hear better; they're about  perking up floppy ears.

Ear
cropping is a procedure conducted mostly by breeders to get a dog's ears to
conform to the standard for their breeds.  Very simply put, it is done
to make their ears stand up.

Gregg Miller, the basement inventor
from Oak Grove, MO, created ear implants for the ears that fail to stand up straight, even after they are cropped.  He claims he's had about 1,000 demands for the implant. So he spent the last
five years trying to perfect the implant so that it would not infect a
dog's ear as the ear tissue incorporates it. His patent pending device,
though now ready for sale at $400, requires veterinary surgery that
will cost, according to his estimates from $300 - $500.

Miller
claims that a dog doesn't even feel the implant in his ear.  Problem is
dogs do feel a lot of pain for a long time after the cropping.  When
ears are cropped at the early age of 7 - 12 weeks, many nerve endings
are severed.  They take time to heal and have a harder time healing
because their ears are taped "in position" for eight weeks or more
subsequently. 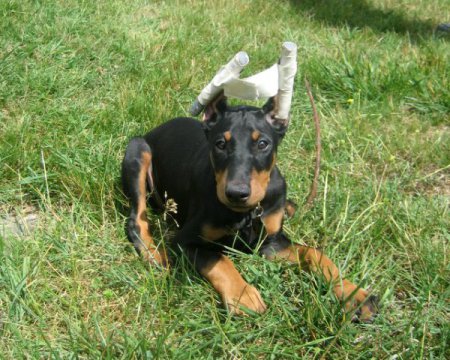 But
sometime after the tape is removed, it may be discovered, as it is in
about 20 percent of the cases, that the ear droops anyway... that the
ear is broken.

Ear
cropping is 100 percent cosmetic.  It is done to comply with the
American Kennel Club (AKC) standards on the shape and size the ears of each
breed should show.  If owners want to make any money from their
show dogs, they will make sure their dogs meet the breed
specifications, even though the dog's progeny will also be born with
non-breed standard ears.

Which brings me back to Mr. Miller's
PermaStay Ear Implants... Good luck with these Mr. Miller.  They seem
to do the job.  And there probably is a greater demand for stand-up
ears than for plastic testicles in the dog breeding world, as the AKC
wants the real testicles left on.

A New Leash On Dog Walking: The SmartLeash® Protects You From Falling On Your Face When Your Dog Decides To Chase A Squirrel

For Cats Who Just Won't Let You Work: The Kitt-In Box®
What Do You Expect For $499? The "Perfect Petfeeder"
Comments