Decline In Menhaden Populations Threatens Survival For Other Fish

If you've never heard of menhaden it's probably because they aren't
exactly good eating -- not to humans anyway. However they are often a
favorite food for the fish that we do like to eat -- and those we just
know and 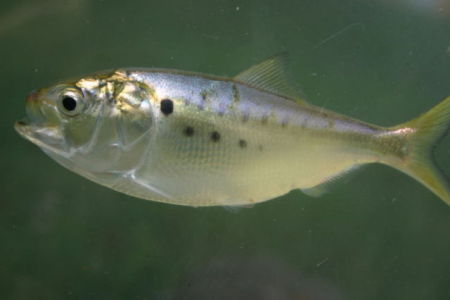 Menhaden (Photo by Brian Gratwicke/Creative Commons via Wikimedia) love. So the seriously declining numbers of menhaden along the
Atlantic coast could spell doom for more than just that one species of
fish.

While humans may not eat these fish in this day and age, they were once eaten like sardines by early Americans, and were the fish that Squanto taught the pilgrims to plant with their corn as fertilizer. Fertilizer, fish oil and fish meal are the current commercial uses of the fish. Other marine creatures such as striped bass, bluefish, flounder, dolphin, and whales as well as birds such as ospreys, loons and pelicans feed heartily on menhaden. 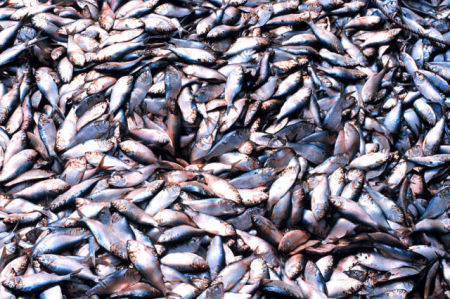 Menhaden In The Hold Of A Vessel (Public Domain Image)For many areas the fishing of menhaden is considered sustainable, but the Chesapeake Bay, where the bulk of the fishing has taken place the fish is declining most rapidly. Fishing limits to help restore the population there are being proposed by the Atlantic States Marine Fisheries Commission. All of the states along the East Coast must agree to these limits.

The one possible sticking point in the adoptionof these limits is the state of Virginia. In Virginia decisions about fisheries are made by the Marine Resources Commission which works for conservation and management. The one exception to this standard is just one species -- the menhaden. The fate of this fish is in the hands of the state's General Assembly, a body with a different agenda for how it makes decisions.

The state of Virginia has managed to come through to help other marine species such as the striped bass and the blue crab, but those decisions did not have to pass through the General Assembly. Hopefully the politicians and lobbyists will realize how important it is to help with the recovery of menhaden population is to both fish and men.