Cuttlefish On The Decline Off India

Illegal fishing of cuttlefish along the west coast of India has local
fishermen there threatening to stage protests if officials do not take
action to enforce the banned method of fishing. The fishermen have
noticed the number of cuttlefish in decline and fear that they could
disappear entirely without intervention. 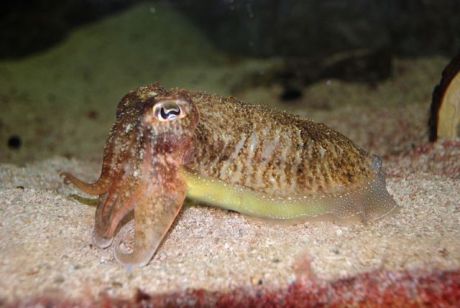 Cuttlefish are cephalopods in the same class as octopuses and squids. They differ in having a unique inner shell known as a cuttlebone. This "bone" is processed and sold commercially for the use in bird cages for pet birds. They are very intelligent and capable of changing color to camouflage themselves to avoid predators. They also use their color changing ability to communicate with one another. Another unique part of the appearance of the cuttlefish is the unique W shape to the pupils of their eyes.

The banned method involves
dropping the trunk of a coconut palm into the water near some rocks where the fish
are supposedly drawn to the rotting mass, making it easier to catch them.

Two organizations representing the fishermen have approached both the Central Marine Fisheries Research Institute and the College of Fisheries with their concerns. The Deputy Director Fisheries Sureshkumar Ullal has countered that cuttlefish
catch was good in the current season, and that the two organizations had not provided enough proof that other fishermen were using the banned method.

Dried and shredded cuttlefish is a popular snack food in East Asia.

Endangered Ferrets Head Off To Boot Camp
When Ferrets Fly