Forget waving the Pittsburgh Steelers 'terrible towels' at this year's Super Bowl. Because not only are they not playing, all eyes might be viewing something else wagging on the gridiron - namely some very cute puppies with unlikely football names such as Aurora, Chestnut and Sally.

Coupled with the fact that most folks don't even know of the Puppy Bowl - let alone it's into its 9th year - a study's just been released that links cuteness to aggression. Presenting their findings at the Society for Personality and Social Psychology conference on Jan. 18, researchers linked cuteness with aggressive tendencies and labeled the behavior "cute aggression."

According to the results of the recent study, photos of cute animals tended to make participants feel a desire

to squeeze that animal. Some participants even experienced a loss of control -- that is, a participant finds an animal is so cute that he or she "can't handle it." Well, if that be the case, we don't suggest watching this year's Puppy Bowl, which has been described by some as the epic battle of cuteness.

TMZ has their own take on the event and features this year's very cute starting line-up.

In answer to the question raised in the above vid, there's also a kitty half-time show for all those cat people who can only take so many adorable dogs. Here's a peak at their performance last year from Animal Planet.

Let's see Beyoncé top that act this year at her half-time show!

Airing at 3pm on Super Bowl Sunday, Feb. 3rd, E/P, Puppy Bowl strives to offer a cute but still aggressive alternative to the

clash of helmets between the San Francisco 49ers and the Baltimore Ravens at Super Bowl XLVII. Each year, a few dozen baby pups take to the field -- 34 of them made the starting line-up for 2013. Each comes from a rescue organization. And according to Laurel Brown at Zap2it, "if these cuties don't make you think about dog adoption, nothing will."

Animal Planet describes the tournament as the "biggest events on all fours!" Duking it out at the grand gridiron of Animal Planet Stadium, these little canines will be tasked with terrier tackles, puppy penalties and Fido first-downs. Sure to be a tail-wagger -- for the first time this year, viewers can watch the action via the new live Puppy Cam, previously only tested on larger dogs. See you on the 50-yard line! 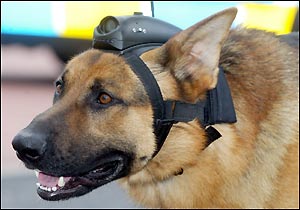 Keeping His Nose To The Ground, Sheriff’s Bloodhound Seeks Name

10 Facts About Pet Sitting That Might Spark Your Interest In A New Career!
Comments