Animals Up In Arms: A Look At Animals Fighting and Loving

How do animals argue? Are they really so different from us when it comes
to expressing bad feelings? Do they ever do anything they regret, or is
everything forgotten after the initial outburst? Read on for some
insight into this most interesting concept.

No matter how much cats fight, there always seem to be plenty of kittens. ~ Abraham Lincoln

Why Do Animals Fight? 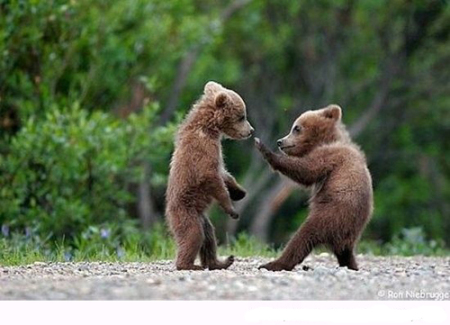 Put em' up, Orson, whatever that means!

These two bear cubs are expressing themselves in a fighting stance, but it is hardly likely that tempers will  flare because they are just babies feeling their way around their new world. Darwin once stated that the difference between human and animal intelligence is a matter of degree, not of kind. Does this carry over into the abiity to express emtions as well? It can be concluded that in its own way, it does indeed.

Cats And Their Conflicts In the case of cats, particualrly, the instinct to establish territory is a primary source of conflict. Unlike dogs, cats are solitary creatures without complex social structures and as such, their attitudes about sharing territory with other felines will vary. Many times, a cat will tolerate some cats or even dogs in a family but not others. As a general rule, the more cats that live together the more likely they will at some time or other end up fighting with each other. This is especially true if the living space is somewhat small. (If this is the case, one drastic solution might be that you move out and leave the battlefield  to your cats, dogs and whatever!) 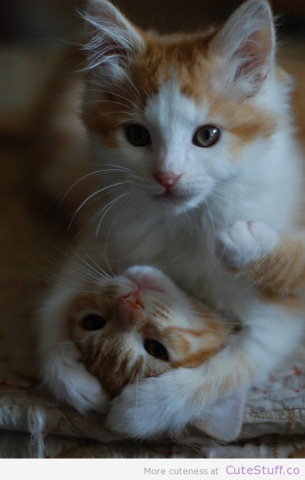 It's not what you think. It's worse!

The problem with establishing pet harmony is the fact that no one really knows why some cats get along and others don't. We can guess that as humans sometimes, for whatever reason, we just don't like everyone we meet, but that is an anthropomorphic speculation. It is likely that kittens that have been socialized with other felines are more likely to be accepting of other cats, and that street cats that have not had early socialization may not do that well in a household of multiple pets. 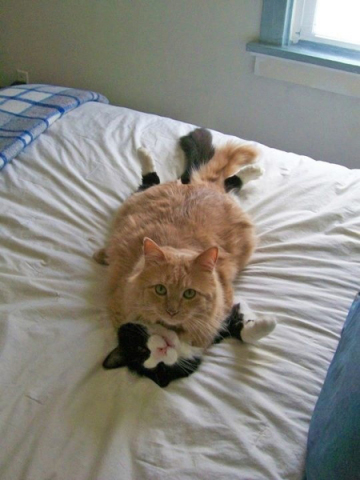 A loud noise, squirting the cats with water or throwing something soft at them like a pillow will often temporarily diffuse the situation. Never try  pulling the animals apart unless you don't really need your hands and are ready to say goodbye to  them. While engaged in conflict, they are not your beloved pets; they are enraged creatures with unbridled instincts to bite, claw and scratch at everything in their path. Once the fight is over, talk softly to your cats and don't punish them. To do so will only aggravate the situation and may also make you a target for redirected aggression. 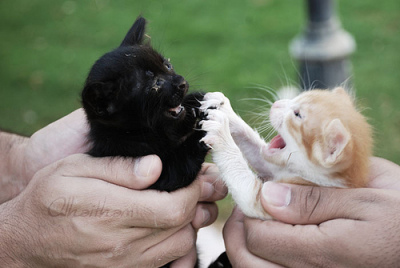 We are both agreed. I like you but not your owner.

Getting the cats to be friends again must be done gradually, and the most
common mistake cat owners make (if anyone could own a cat in the first
place)  is to try and re-introduce the animals too quickly. The idea is
to expose them to each other gradually and in such a fashion that the
encounter becomes associated with something pelasant, such as a favored
treat or catnip. The motivation for aggression will eventually diminish
as good things infuse their mutual experiences. 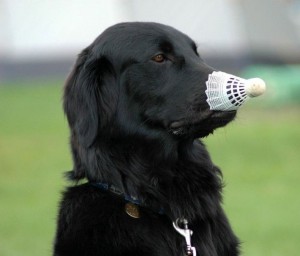 Get the birdie, not the doggie, you idiot!

Tensions between dogs in a household  is largely preventable by the owner who may be ignoring his or her dogs' social heirarchy in an attempt to be fair and equitable. Dogs  are known to have a strong social structure in which one dog is the most dominant (alpha dog), followed by a more subordinate dog, and then another and so on down the line until you have run out of dogs. If you are not sure which is the least dominant dog in your household, in most but not all cases, it is the dog that most willingly relinquishes its toys and food to others.

Although not always true, what often happens when an older or more delicate dog gets the most attention from an owner, regardless of where in the pecking order that animal belongs, the more dominant dog may feel the need to punish the favored animal by aggressive growling and biting. An owner who further but understandably punishes such action by scolding or yelling only compounds the problem.

Sometimes just a bit of support for the dominant dog  will solve everything. Give that animal a little more attention in small ways, such as providing closer access to you on the bed or sofa and requesting fewer demands before doling out toys and treats. If a fight does occur, it's for animals only and the owner should leave the room (pass go but do not collect $200) and never punish either dog for fighting. 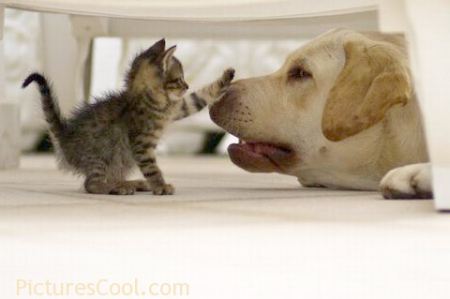 I want to play with your bone. Where did you hide it?

That old expression about cats and dogs both is and isn't true. If socialized early, in many instances dogs and cats can and often do become bosum buddies.  According to the American Veterinary Association, 44% of American pet owners have multiple pet households and the most common blend is cats and dogs. 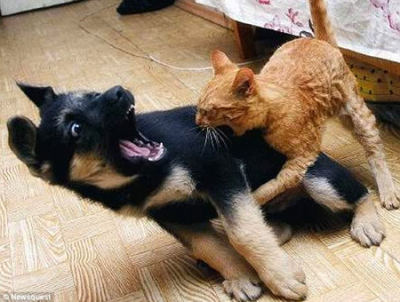 Dogs eating up all the food and chasing cats are the two most common situations. Feeding  your animals at two  different stations may help and in the other instance, consider obedience training for both the dog and the human caretaker. The dog needs to learn self-control and the owner must establish rules and be consistent. Problems can  arise, but they are no different from other bids for territory, space and attention.

Animals in the Wild 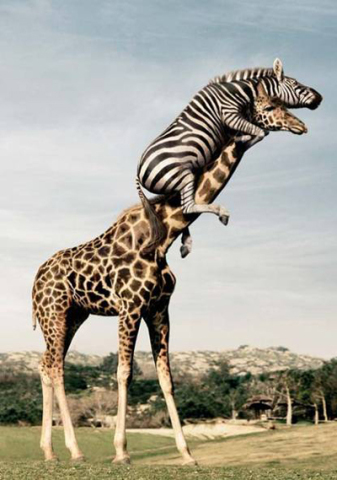 When the law of the jungle prevails, experiences and relationships among wild animals  become associated with competition for food and space. There's not a lot of time for sharing toys and frolicking playfully in the grass, and a peaceful co-existence is very much a matter of staying out of  each other's way. Every now and then, however, weird things happen in the jungle too, such as our very strange duo of stripes and dots illustrated above and the monkey business below. 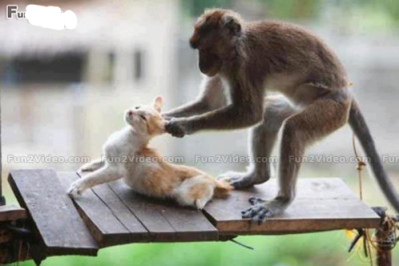 Don't kid me! I saw you put a banana in there.

So wherever we are and whatever we do, we always have to be aware of the wants and needs of the animals we love. Their expressions of fear, jealousy, unhappiness and contentment are really not on such a different plane as ours; they are just coded and fused into memory in a dissimilar fashion.

Spend more time with your beloved pets. They will appreciate it and just maybe put away the boxing gloves in exchange for a significant pat on the head or a loving rub behind the ears.

If All Animals Are Sentient Beings, Should We Reduce Meat In Our Diets?
PetsLady's Pick: Adorable Water Kitten Of The Day
Cat Tattoos! The Skin Art Animal Video of the Day!!!