Crunch This: Crocodile Bite Found Twice As Strong As That Of T Rex

Just last month, scientists at the University of Liverpool, using computer models, determined that the Tyrannosaurus rex had the most powerful bite of any living or extinct animal.  But this week an international team of researchers from several universities published its 10-year study that determined the largest extinct crocodiles had bite forces exceeded 23,000 pounds, a force twice as great as the T rex.

Skull and jaws of a wild adult American alligator (Alligator mississippiensis) showing the prominent teeth: image from Plos One study via wwffm.org

The team was led by Gregory Erickson, biology professor at Florida State University, and included a diverse team of crocodile handlers and scientists. Testing crocs, alligators, caiman, and gharial, the team checked out their bites by placing a force meter between their back teeth, The crocs and alligators won the 'bite' contest, with just about the same force, despite having different snouts and teeth. 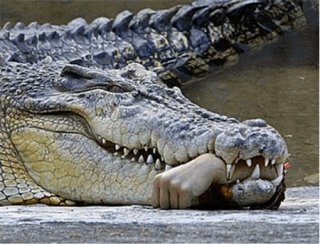 National Geograthic photo of Nile Crocodile - reportedly the hand was re-attached successfully to the human: National Geographic via flipkey.com The study, published in PLoS One, contradicts the evolutionary theory that holds that diet, jaw shape, or jaw strength.  Instead this team's study indicated that bite force correlated with body size and showed little correlation with jaw shape, jaw strength, tooth form or diet, but that the later developments followed the acquisition of bite force.

And the researchers now have entered  a 17-foot saltwater croc whose bite force measured 3,700 pounds into the Guinness Book Of World Records!

"This kind of bite is like being pinned beneath the entire roster of the New York Knicks," said Dr. Gignac, illustrating the tremendous force displayed by the living creatures. "But with bone-crushing teeth." (I wonder why he used the Knicks analogy instead of the Giants....)

"Crocodiles and alligators are the largest, most successful reptile hunters alive today, and our research illustrates one of the key ways they have maintained that crown," said Dr. Gignac.

That's the crunch for today!