Crocodile Sighting Along The Thames

Folks in Reading, Berkshire in England have been in a bit of a kerfuffle
lately over reported sightings of a crocodile or alligator in the
Thames River. The large reptile was reportedly spotted as recently as
last week 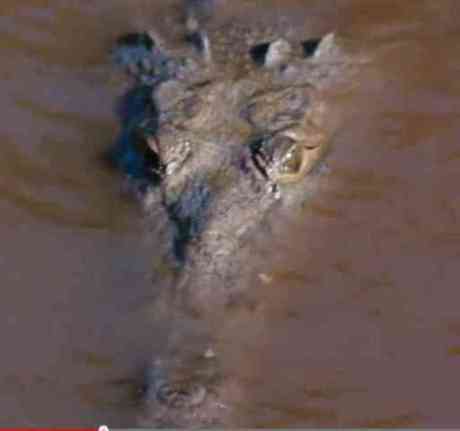 Crocodile in the Movie "Live and Let Die" (You Tube Image)by a man out for a spin on his bicycle. The same man also
believes he spotted the creature last summer. Rumors have been spreading despite the
assurances from authorities that neither alligators not crocodiles
could survive in the cold waters of the Thames.

Another local man has come forward to say that the reptile is a dummy croc from the movie "Live and Let Die" from 1973. It had been used in the scene where Roger Moore as James Bond has to walk across the backs of gators to escape a swamp.

The prop had been kept on an island in the Thames in Reading by Peter Wallace, a boat expert and head of Caversham Boat Service. He had worked on several James Bond and Indiana Jones films.

It is suspected, but not confirmed, that the fake creature was washed away by flooding and that the sightings have been of this instead of an actual crocodile or alligator.

Shaun Foggett, a crocodile expert and director of Crocodiles of the World in Witney, Oxon, England, gets a lot of questions about these sightings and says that people are just lettiing their imaginations get the better of them.

Keep The Koi In Line With An Alligator In Your Pond

Florida. Yeah. We Have Monsters Here. The Animal Video Of The Day!!!

European Football -- The Animals Versus Humans Video of the Day!!!
Comments