The Siamese crocodile is considered critically endangered by the
International Union of Conservation of Nature (IUCN). On Saturday the
species, a freshwater crocodile native to Southeast Asia, suffered a setback when what is
thought to have been the last Siamese crocodile in the wild in Vietnam
was found dead in the central province of Phu Yen. 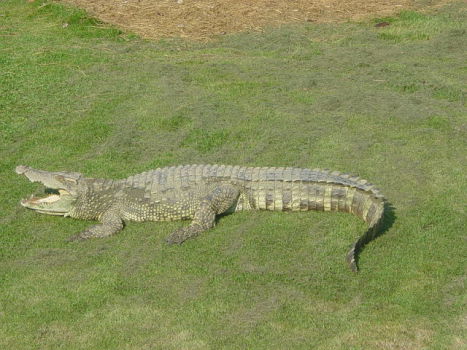 The creature had been strangled to death with a pair of steel wires about three days previous to its discovery. The reptile was estimated to have been around 100 years old. She was checked to see if she was carrying any eggs, which would have given some hope that there was a chance that there was still a male alive in the area. No eggs were found.

As recently as the 1970s the crocodiles were a pesky threat to livestock in the area as they would creep into cowsheds to prey on cattle. The locals considered the creatures as a connection to their ancestors. They believed that as their relatives passed away they entered into the crocs, so they would never harm the animals.

Last year the last Javan Rhino in Vietnam died and now the last Siamese crocodile. Concerns remain in the nation for the Indochinese tiger, Asiatic elephant, and yellow-cheeked crested gibbon.

It is estimated that there are no more than 100 Siamese crocodiles left in the wild worldwide. They are extensively bred in captivity though. As with so many other endangered species, they have been brought to the brink by human encroachment on their habitats and by pollution.

Why The Howler Monkey Is A Bad Pet Idea
Comments