is one of the longest running American reality show. Since it first aired in 2006, it has spawned a 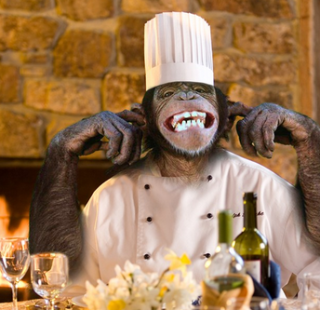 slew of very popular epicureans from Carla Hal (now on The Chew) to Michael and Bryan Voltaggio (two brothers who actually competed against each other.) So with all this new-found love for the culinary arts, could man’s evolutionary cousins -- the chimpanzees -- ever rise to the status of 'chef' and actually prepare a nice home-cooked meal?

Research studies have shown when chimps are presented with some tasty morsels cooked up by a human chef, they will more than likely drop their bananas and pony up to the dinner table. And according to some new research published in the ‘Proceeding of the Royal B’ journal, it appears with some guidance and training, they may be able to learn to cook for themselves.

The findings suggest chimpanzees have the same mental capability to cook their food as humans do. The study also showed that these animals actually prefer to eat meals that have been cooked, versus raw food.

Chimps are no tools when it comes to tools . . . 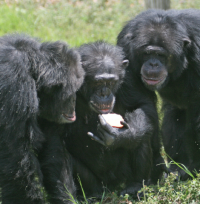 The transition to a cooked meal regimen represents an important shift in human ecology and evolution. Cooking requires a set of sophisticated cognitive abilities, including causal reasoning, self-control and anticipatory planning. Chimps possess all of these attributes.

In the study, the research team presented an elementary cooking device to the chimps. The tool would allow them to slice a raw sweet potato. Then they gave them another device that wouldn't cook or slice the potato at all. The results showed a vast majority of the chimpanzees chose to use the cooking tool to slice and dice their potatoes.

basic concepts of cooking. For instance, they preferred to cook foods like carrots and were able to show that they knew that only edible items could be cooked. They were also willing to wait to give food the appropriate amount of time to cook, and even transported and saved raw foods so they could cook them later.

This study and others have shown that chimpanzees can also learn to prepare food. For instance Kanzi, a Bonomo chimpanzee from the Iowa Primate Learning Sanctuary in Des Moines, Iowa learned how to start and control fires with matches and lighters. Additionally, he can also cook his own meals using grills, pans and even use sticks to roast marshmallows, according to this BBC documentary.

So, the question remains. Could a chimp ’Top Chef’ show on the Food Network be in our foreseeable future?

As reality shows go, it 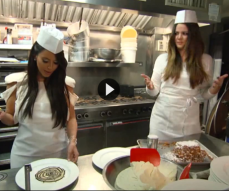 would seem to me, it could certainly beat out some of the other pablum that the TV networks have been feeding us for years - not mentioning any names - the Kardashians - just saying!

Grumpy Cat: The Movie? The Animal Video of the Day!!!