Could 'Be Kind to Animals Or I'll Kill You' Ever Be A Fashion Statement?

Well, them’s the fighting words Morrissey (aka Moz), controversial singer and former frontman for the ‘Smiths’ 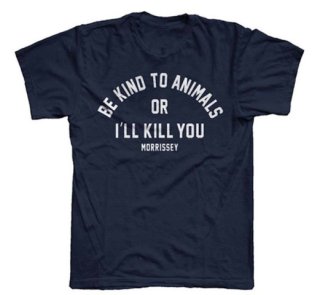 has emblazoned on garb he’s hawking on his new online shop. At the eCommerce site called the “Mporium,” you’ll find T-shirts labeled with the offensive and threatening warning, “BE KIND TO ANIMALS OR I'LL KILL YOU."

Moz, a militant vegan and friend to all animals, has made it clear previously in supporting PETA with such campaigns as “combating the cruelty of foie gras,” that he doesn't much care for humanoids and their abuse of animals.

Dating further back, when he released the Smith’s 1985 album Meat is Murder, the outspoken singer was harshly criticized for comparing killing animals for meat to Auschwitz and describing Chinese people as a “subspecies,” because of their treatment of animals.

MorrisseyIn February 2013, he also pulled out of an appearance on the US talk show Jimmy Kimmel Live as he refused to appear alongside a cast member of the duck hunting-themed reality show Duck Dynasty.

"I can't take the risk of being on a show alongside people who, in effect, amount to animal serial killers," he explained.

This past January, the singer caused additional controversy when he announced there was “no difference 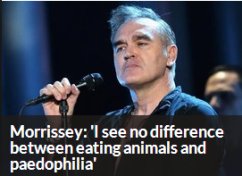 between eating animal and paedophilia.”

The Mporium’s other inventory is definitely more tame. Some items are imprinted with appropriate song titles or classic lyrics. There’s a “Shoplifters of the World Unite” tote bag, and a mug carrying the line “share some greased tea with me,” a lyric from “Everyday Is Like Sunday.” The animal activist’s store also includes mini-boxing gloves (capitalizing on the Morrissey branded boxing gloves), mouse pads, pillowcases, hoodies, postcards, tea towels, and a Morrissey standard -- the metal cross necklace.

According to a DIY report, initially his products were only offered in the UK until a US store opened on September 26.

While I’m sure Moz has support for his controversial T-shirts from organizations like PETA, and his slogan was done more to raise awareness than as a physical threat, it’s an extreme tactic for catching the public's attention.

It would be interesting to check in with the man in a couple of weeks to quiz him about the sales of his controversial garment. 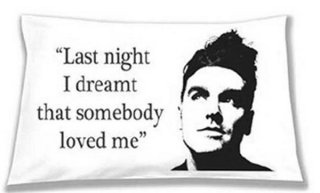 While I’m sure the revenues are going to go towards Moz’ favorite animal charities, IMHO, I don’t see this approach making enough to distinguish it as a major fund-raiser. Particularly, when this subtle gent is OK with the fact that his actions and words have created more enemies than fans. After all, the love of animals should include homo sapiens as well, don't you think?