Police dogs meh, police cats YEAH! Though their K-9 cousins get most of the glory, the feline fuzz have put their own fair share of dirty rats behind bars. Here are seven kitty constables ready, willing and able to flex the long arm of the claw... if they're in the mood.

Fear Of A Black Cat Planet 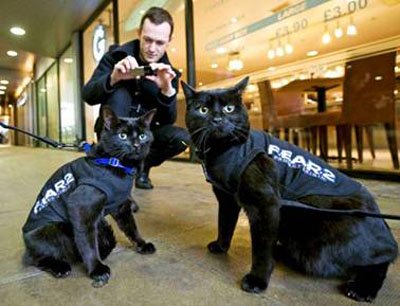 Paul Blart-style mall cops might just put a little fear into galleria evildoers if they conducted patrols with a pair of black cats. For the time being, however, we'll just have to make do with trained black cats like these ones, commissioned by Warner Bros. Interactive Entertainment to advertise the new F.E.A.R. 2 game in London. (police cat image via Kotaku) 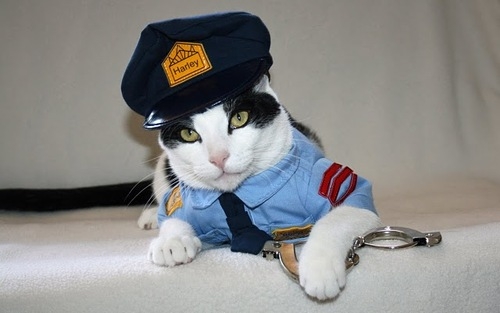 We don't know who this cat is or what police department ostensibly employs it but one thing's for sure: cool cow-cat can really rock a uniform! (police cat image via Salon24) 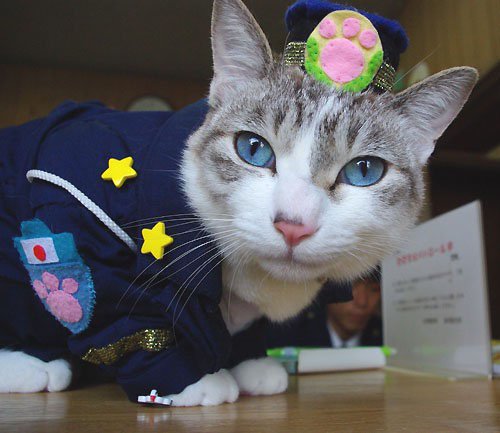 As an abandoned kitten, Lemon was taken in by the wife of a police sergeant from Kyoto, Japan. These days Lemon accompanies detectives when they visit elderly victims of financial scams. While he may not apprehend any scammers, Lemon helps their victims relax so they can recall useful information that can assist investigators. (police cat image via Sato-Yado) 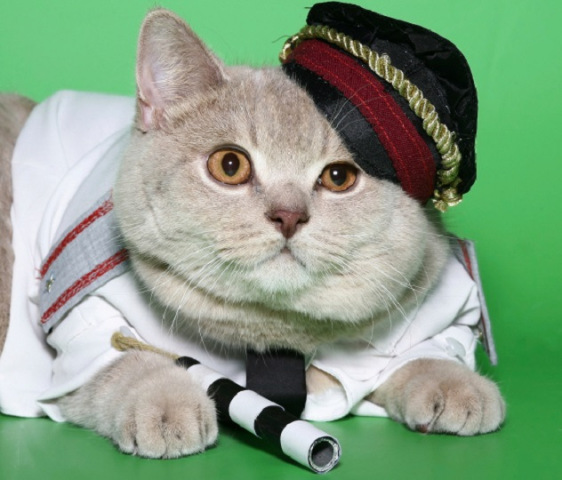 Smuggling sturgeon in Stavropol? Be prepared to face the music... from Rusik, Russia's foremost fish-finding feline! Rusik was adopted by officers at a customs checkpoint near the Caspian Sea and fed bits of sturgeon, an endangered fish often smuggled by poachers. Rusik learned to follow his nose and officers at the checkpoint learned to follow Rusik, who sniffed out contraband sturgeon so efficiently he put the previous fish-sniffer (a dog, no less) out of work. Truly a hero to cat-kind! Sadly, Rusik died in the line of duty when a nervous smuggler ran him down but officers are actively training replacements. (police cat image via BBC)

As anyone - cat or human - knows all too well, the best defense is an off fence. The little black kitten above takes that old maxim a tad too seriously, perhaps, but livin' ain't easy for a wee kitty in the holy city of Jerusalem. Besides, spell "god" backwards and you get... trouble. (police cat image via atay0986) 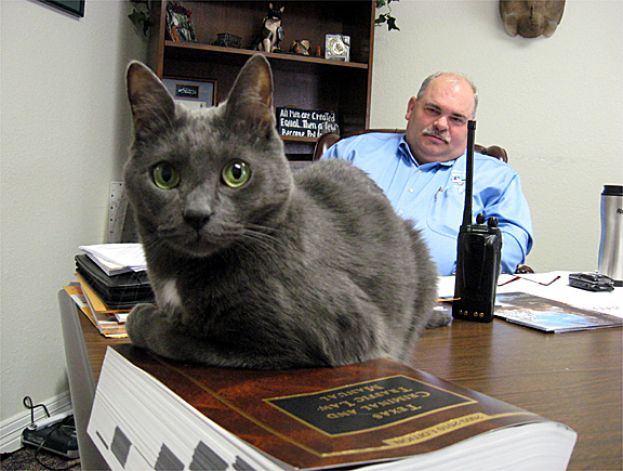 Jade, a three-legged gray cat adopted by the Lumberton (Texas) PD twelve years ago after being brought to the station as a kitten, is charged with calming and comforting those on both sides of the law. Don't mess with Texas... or a Texan cat. (police cat image via Blair Ortmann/Beaumont Enterprise) 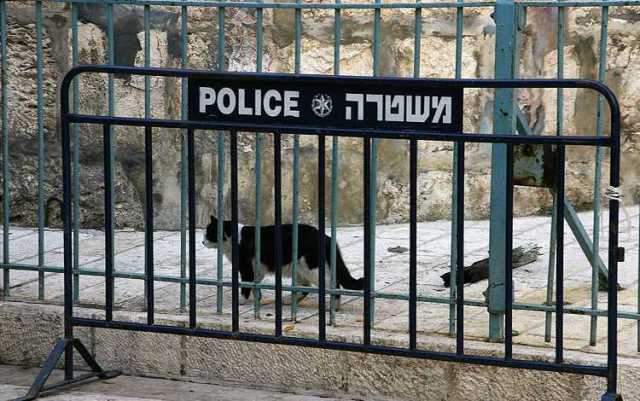 Hey look, a black & white police cat behind bars... or perhaps, in front of them. Don't remember what you did last night? Tell it to the judge. (police cat image above via TrekLens, at top via Mama, Esq.)

Not up to speed on the police cats patrolling your neighborhood? That's just the way they want it – ninjas got nuthin' on an undercover kitty. Police cat fans of all ages can enjoy Police Cat, however, a book by Enid Hinkes illustrated by Wendy Rasmussen that tells the tail, er, tale of Noodles, a mild-mannered cat whose exploits earn him a “Hero-of-the-City Award” and a matching uniform that is (and isn't) the cat's pyjamas.

PetsLady's Pick: Funny Hug Your Hound Day Dog Hug Of The Day
Cow Livin' The Good Life With Bisons?
What is a Tardigrade? The Insanely Cool Animal Video of the Day!!!