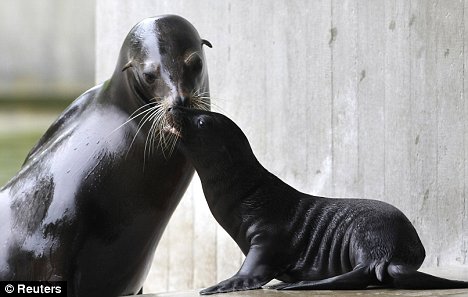 The mother and baby sea lions above are
performers at Sea World in San Diego.  Mama sea lion was becoming
disoriented from blurred vision caused by cataracts, until she was
fitted with intraocular contact lenses that enable her to perform
again, and to see and be a role model for her newborn.

No, lens implant surgery for animals is not an every day occurrence... yet.  But thanks to a German chemist and entrepreneur, Christine Kreiner, who recognized the need to restore vision for animals with cataracts, contact lens surgery for animals is slowly being taught to veterinarians from San Diego to Bejing, and the World Wildlife Fund even supports the cause. 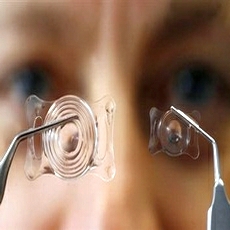 Custom made contact lenses; left for a horse, right for a cat.S & V Technologies was formed in 2008 by Ms. Kreiner to produce the acrylic intraocular lenses and provide implant surgeries to animals from cats to rhinos!  In addition to helping the sea lionness, the company has provided implants to a blind kangaroo, a lion, racehorses, circus animals, guide dogs, and several household pets.

Ingeborg Fromberg, head of the veterinary division of S & V, said that since animals generally become blind from cataracts, and they have such short life spans, that blindness can really impact their quality of life.  One disease that afflicts horses, head shaker syndrome, is both terribly painful and ultimately life-threatening, but it can be helped by S & V with special contact lenses that absorb UV rays.

"When something is unsettling for an animal, when they don't have a
good sense of their surroundings, they can begin to get aggressive or
unpredictable or withdrawn," Fromberg said. Apparently, blindness also affects their sex drives, stopping animals from reproducing.

As a business, S & V Technologies is not doing badly, making 2.5 million euros in its first year.  The only thing holding S & V back is the limited number of veterinarians able to perform the surgeries.  So now, the company is holding training weekends for participants from around the globe.  So far, veterinarians from the U.S., Australia, Japan, Taiwan, and Brazil have come to the training.

The implant surgery is so expensive, no one has reported a price for the procedure.  Presumably a lot depends on whether you bring in a cat or a rhino!