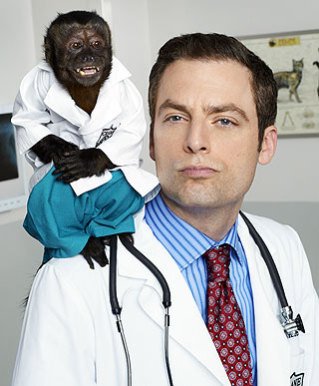 Justin Kirk (and monkey) in NBC's Fall comedy, Animal Practice: image via blog.zap2it.comNBC has apparently decided to join the booming pet business by scheduling a pet-centered comedy, Animal Practice, for the Fall.  Perhaps the boom in pet spending augers success for serial pet comedies; it would if the comedians were animals!

But this comedy will apparently focus on people, like most sit-coms, so we'll see how much play the actual patients get.

Animal Practice was preceded by its TV pilot called Animal Kingdom; maybe the 'kingdom' was a bit too lofty for this comedy's ambitions.

How Did The Crab Cross The Road? On The Crab Overpass, Of Course!