Actor and comedian Ricky Gervais has taken sides on the controversy over
animal testing for cosmetics. He has taken a stance against companies
accused of putting their bottom line before their ethics to sell
products to China where animal testing is often required. 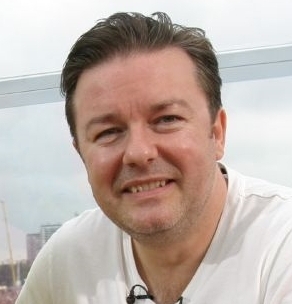 While animal testing is still legal in the United States, its use is so unpopular that it has become a marketing liablity. Animal testing has been banned in the United Kingdom since 1998 and will be completely phased out in the European Union next year.

A number of companies that have marketed themselves as "cruelty-free" have  gone back to animal testing to be able to market cosmetics in China. China requires the testing before the products can be marketed there. These companies include such top names as Yves Rocher, L'Occitane, Mary Kay and Caudalie.

Gervais spoke in support of the Humane Society International's Be Cruelty
Free campaign. The campaign aims to end cosmetics animal testing worldwide. He commented that he is angry that this practice is still being used. He is even more outraged that companies that had stopped animal testing have returned to the practice just to profit from the Chinese market while leaving their ethical stance in the dust.

"Ethical principles shouldn't be up for sale. You cannot put a price on morality and compassion," he explained.

Things You Never Knew About Hippos