Colorado Boy Receives "Miracle" For His Wolf While In Surgery

For children a stuffed animal is just as real to them as a living and
breathing one. When 9-year-old Joshua Wade had to go into the hospital
he wasn't about to go alone. His best friend, Wolf, had to go with him.
Not only was Wolf an extra bit of courage a boy needs in a scary
situation, the stuffed animal was also in need of surgery. Joshua was
very disappointed when his parents told him that the surgeons couldn't
help Wolf. 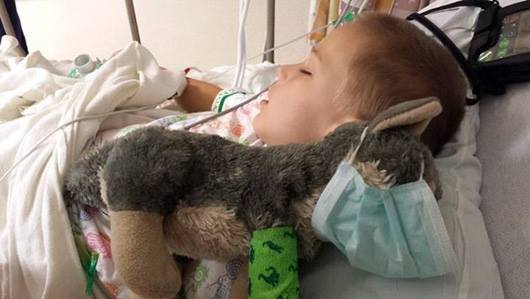 Joshua Wade and his best pal, Wolf (Photo via Facebook)

The stuffed animal had a rip in the seam of its front right leg and when Joshua was checked into Memorial Hospital for Children in Colorado Springs, Colorado, for an endoscopy he asked the doctor if they would help Wolf. Joshua's parents tried to gently explain that they didn't do wolf surgeries at this kind of hospital and promised that they would get Wolf the kind of help he needed when they got home.

Wolf accompanied Joshua into surgery to make sure everything went okay. Once Joshua was asleep and the procedure was done, his doctor, pediatric gastroenterologist Christine Waasorp Hurtado, and his anesthesiologist, Tom Strandness, decided to slip one more surgery into the hospital schedule.

When Joshua woke up from the surgery and groggily reached for Wolf he found that his best friend was wearing a surgical mask and a bandage on his leg. Underneath the bandage were surgical stitches closing the hole in Wolf's leg. Just then Joshua was the happiest boy on the face of the planet because he had just witnessed a miracle.

Joshua's dad, Kevin Wade, was touched by the act of kindness and posted the photo he took of his son on Facebook and the pic is now making the rounds on the internet.

It turns out that Hurtado is a doc with numerous stuffed animal surgeries to her credit. "If a kiddo comes in and makes a big deal over a doll or teddy bear with a boo boo, I'll fix them up," she explained. "We want them to feel like a loved one is going through something similar. It distracts them."

The extra blessing of the miracle was that Joshua was focused on his furry pal rather than his initial pain and discomfort. Wade was fighting tears when he thanked the doctors for the wonderful gift they had bestowed on his son. He and Joshua will never forget the power of such a sweet and simple gesture.

After a couple of days back home Joshua removed Wolf's bandage and pronounced that he was all better. Joshua is also doing better and is now on a gluten-free diet to help with his intestinal issues.

Hopefully this small event will follow Joshua through his life and he will find ways to bring such small joys to make a difference in other people's lives.

Something For Your Little Night Owl
Comments