Cock Of The Walk, Or How Did The Chicken Cross The Sea?

The chickens of Hawaii are a very hardy breed, dissimilar to any that have made their way to your dining room table. While 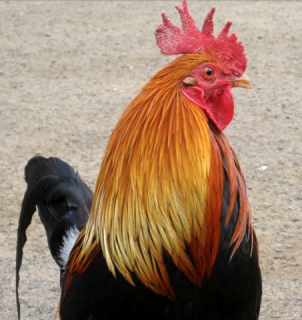 domestic chickens on the mainland no longer resemble their ancient ancestors, those that reside on the Hawaiian islands are a different story. The Red Junglefowl — the chicken's closest living relative — is believed to have been introduced to Hawaii by Polynesians centuries ago.

They were then cross-bred with domestic chickens, following Captain Cook’s landing on the archipelago in 1778, making Hawaiian chickens genetically feral.

Most recently a scientific study led by Michigan State University researcher Eben Gering is searching deeper into the mysterious ancestry of the feral chicken population that has overrun the Hawaiian Island of Kauai. And his team's results, published in the Molecular Ecology may help in curtailing the damage of invasive species in the future, and also help improve the bio-security of domestic chicken breeds.

"It is crucial that we identify and conserve the genetic variation that still remains in the Red Junglefowl. This variation could soon be essential for the improvement or evolutionary rescue of commercial chicken breeds," said Gering, a postdoctoral research associate in the Department of Zoology.

By investigating the hidden-until-now genetic origins of these chickens, the team sought to gain insights into the ongoing evolution of the population.

"We are eager to learn which combinations of genes and traits are emerging from this 'evolutionary experiment,' and to see whether our findings can translate to gains in the sustainability or efficacy of egg and poultry production," Gering said. 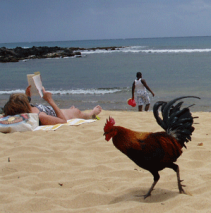 Gering’s team also found evidence for a population increase in the chickens in Kauai that coincided with hurricanes that locals believe released chickens and caused feralization over the last few decades. Taken together, the data suggests that the population may have hybrid origins, resulting from interbreeding between the ancient Red Junglefowl and their domestic counterparts.

As far as why this research is important, studying the evolutionary forces at play among the feral chicken population may lead to the ability to create hardier breeds of domestic chickens.

"Darwin drew heavily from his studies of domesticated species to develop his theory of evolution," Gering said. "This can provide important insights into evolution in action within human altered landscapes, and may even someday help build a better chicken. And that would be something to crow about."

Anyone game (pun intended) for some Hawaiian chicken?

I think my Italian grandmother would have been a worthy match to go up against Kauai’s feral chickens - but that’s another story!

Parahawking, When Man & Hawk Take To The Skies Together
Peabody's Bath Time -- The Animal Video of the Day!!!

Diapers For Chickens -- No Kidding!