Clydesdale Foal The Star Of This Year's Super Bowl

There have been few advertising icons that have been as familiar as the
Budweiser Clydesdale horses. They are animals you automatically
associate with the popular American brewery. The Clydesdales were the
heroes of 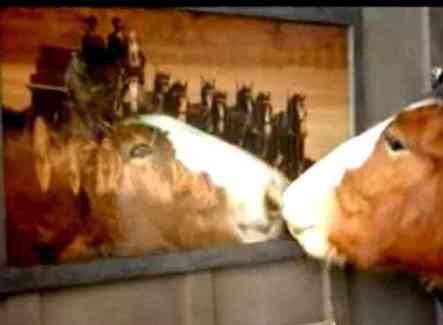 Budweiser Campaign Foal Dreaming of the Future (You Tube Image)yesteryear when they were the beasts of burden strong enough
to haul a beer wagon of that liquid gold. During this year's Super Bowl
Game Budweiser will share with us how a Clydesdale foal grows to
advertising glory.

The gentle equine giants have been part of the Anheuser-Busch family for 80 years now. The company breeds, raises, and cares for the animals from the time they are babies until they retire many years later. They breed about 43 horses every year.

To make the cut to be an authentic Budweiser Clydesdale each horse must have the traditional white blaze on the muzzle and forehead, a black mane and tail, and the four white stocking feet. Those that don't fit the bill are sold to good homes.

In 2012 three hitches of horses travelled the country to appear at 120 events representing the Budweiser brand. The use of the Clydesdale horses to represent the beer goes back to 1933 when August Busch, Sr. was surprised by his son, August, Jr., when he had a team of the horses parade down the street hauling beer as a celebration of the end of Prohibition. From there the horses became a familiar symbol of the company. Anheuser-Busch started breeding the horses themselves in 1940.

The star of this year's slate of Super Bowl is just a young thing -- Budweiser's newest Clydesdale foal. She will be the focus of some 100 million Americans during the event's commercial time, some of whom are watching just to see the commercials.

The foal hasn't been named yet. Budweiser is asking for your help to name the little girl. Tweet your suggestions to #Clydesdales.