The Clooneys Add To Their Growing Family 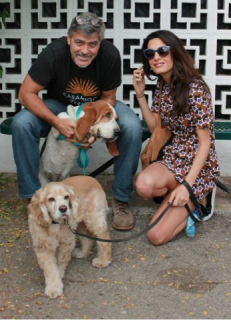 America may not have royalty to put up on a pedestal, but we do have one couple that comes pretty darn close . . . namely, the Clooneys!

And while, Amal Clooney is not in the family-way, per se, the Hollywood couple recently added to growing brood. On October 29, 2014 they ventured out to the San Gabriel Vally Humane Society in California to do what normal good-hearted folks do when they’d like bring a dog into their home . . . they located a rescue pet.

Using the online pet adoption site, Petfinder, they felt the profile of a 4-year-old Basset Hound mix, named Millie was just the right fit. Approved by their other dog, cocker spaniel, Louie the two canines hit it off from the start ,with a ‘meet and greet’ that sealed the deal!

MillieAs reported in USA Today and then uploaded to the Humane Society’s Facebook page, “Louie, George and Amal immediately fell in love with the rescue dog and decided to make it official right away.”

Lynn Coleman, the shelter’s spokesperson said: “"It definitely added to the excitement on one of our busiest afternoons when we do vaccinations for the public," Collmann says.

A spokesman for George Clooney confirmed that the couple adopted Millie from the shelter "and they love her."

As the story goes, Millie’s backstory includes a rough patch where she was found homeless and begging for scraps outside of Macho, a California Café, before being sent to the shelter. But as fortune would have it, that tough road saw a radical turn when the Clooneys made their decision to welcome her into their fold.

That’s right with a rags-to-riches story worthy of Hollywood, Millie then left the shelter a full-recognized Clooney.

Us Weekly exclusively revealed this past summer that the handsome duo, who tied the knot in September 2014,

Millie Clooney, the Movie Starare now trying for a baby. "They decided that it would be the right time," one source told Us. "Amal isn’t taking on extra work at the moment and just continuing with the cases she has."

The question is how is a baby going to sit with the newest member of the household. Will Millie be willing to share her new-found abode, and be as welcoming as Louie was when she arrived, or will she feel someone's stealing the spotlight? After all, she’s a star now!

Time will tell on this one!

For That Weird, Puggy Sense Of Humor

Pet Obesity And Diabetes On Rise, Just Like Humans
Comments