City In China Terrorized By Buffalo

It wasn't the running of the bulls in Pamplona, Spain earlier this week
-- it was the running of the water buffalo in Leshan City in the
Szechuan Province in China. Unlike Spain this was not a planned event
and the citizens there were caught off guard and found themselves
running for their lives. The animal's rampage was caught on
closed-circuit television and that video has been making its way around
the world. 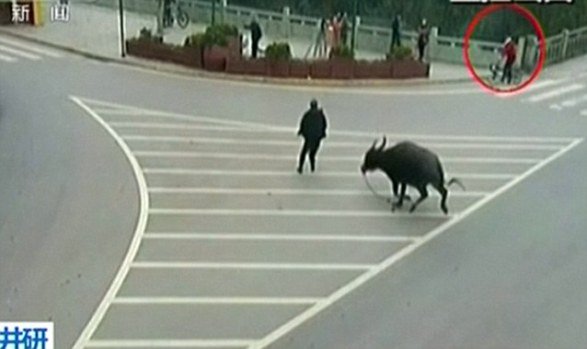 Water Buffalo On The Rampage (You Tube Image)

The water buffalo ran through the streets of the city for 40 minutes, chasing down people going about their daily business. A total of 14 people were injured in the rampage. Local resident Liang Cuirong was wearing a red coat and riding a red bicycle when the animal took aim at her, knocked her down, and trampled her repeatedly. While this seems to give credence to the idea that these animals are angered by the color red, it is more likely that it was her movement on the bicycle that caused the attack. The extent of her injuries has not been released.

Four police officers responded to the incident and were forced to take the animal down. It reportedly took ten shots to accomplish that feat. Just how the water buffalo came to be running loose in the city is still under investigation.

News Stories
Weird, Odd or Bizarre
Wildlife
Baracknophobia or Trapdoor For Fiscal Cliff?
Dog Hitches Ride On Ambulance To Stay With Owner
Trunk-less Baby Elephant May Not Survive
For Dogs Whose Bites Are Worse Than Their Barks: The Bite Guard
Comments