Christmas in July: Grumpy Cat Gets A Movie Deal

Whether it's Ebenezer Scrooge or W.C Fileds shouting his inimitable 'Bah, Humbug' to the world, Christmas needs a grinch, and this year it's slated to be something new: Internet sensation, Grumpy Cat. According to Lifetime Vice President of Original Movies, Arturo Interian, the idea for the project came from his teenage daughters who are big fans of Grumpy Cat. 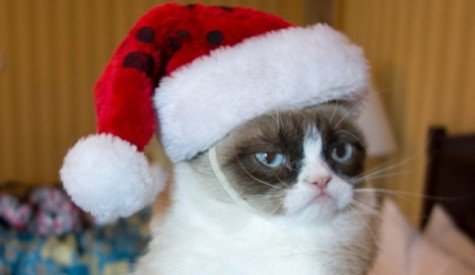 Where Did Grumpy Cat Come From? 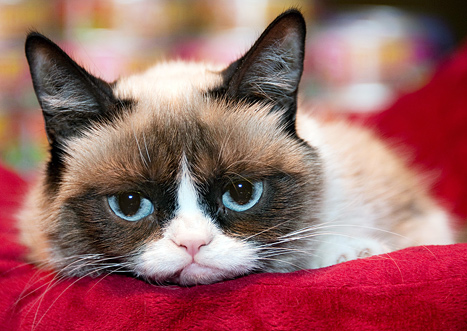 An Internet meme since 2012 when her owner's brother posted a photo of the family cat on the social networking site, Reddit, her real name is Tarder Sauce, the misspelled condiment resembling the color of her fur. In less than two years, that Grumpy face has appeared many times on items ranging from books to a coffee product.

"It is expected to bring fun and irreverence, something that we haven't had  at Lifetime...We're so known for our heartfelt sentimentality that the Grumpy special  will poke fun at those stereotypes."He claims this project is "a little Home Alone and a little Die Hard.

What Is The Grumpy Cat Film About? 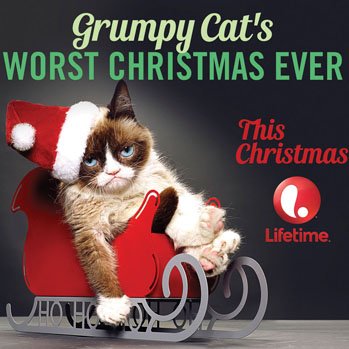 Tom Hill and Jeff Morris of Spongebob SquarePants fame will write the script for the film. The thrust of the story concerns a pet store cat that no one wants and a twelve-year-old girl who can communicate with her.  Lifetime still has not decided on the voice for Grumpy Cat and they are still casting. The film will shoot throughout the summer and will also feature cameo perfromances by other Internet memes.

Grumpy Cat's manager, Ben Lashes, also works with other Internet memes, including Keyboard Cat and Success Kid. He believes that Lifetime is the perfect venue for Grumpy. He says: "When I go home for Christmas, there are movies we always watch...It becomes a tradition. I like that aspect of Christmas."

The star herself stays home in Phoenix, Arizona, most of the time, but as a star, her allegiance to her adoring fans brought her a guest appearance on the 13th season of American Idol  and a front row seat at the MTV Movie Awards back in April.

So Merry Christmas everyone and remember the immortal words of Mark Twain who once said:

"Fame is a vapor, popularity an accident; the only earthly certainty is oblivion.