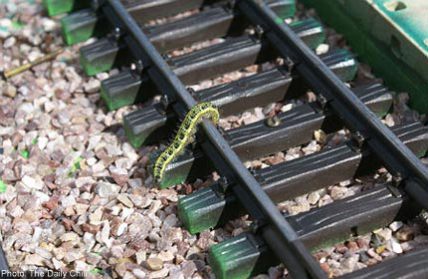 A certain HVAC company likes to say “It's hard to stop a Trane” but millions of Chinese caterpillars beg to differ. In fact, the horde of ravenous wrigglers not only stopped a fully loaded cargo train, it delayed it for three full hours while over a dozen railway workers wielding brooms and shovels frantically struggled to clean the tracks.

According to Xinhua News and an eyewitness to the creepy carnage, the icky incident occurred in the Inner Mongolia Autonomous Region of north China when hordes of caterpillars swarmed onto the tracks.

“The train slowed and then stopped after running over the insects, which were spread out over one kilometer of the track”, stated Fu Jianguo, an officer with the railway police station based in the town of Wudan. The image at left describes Fu's co-worker alerting him to the situation. 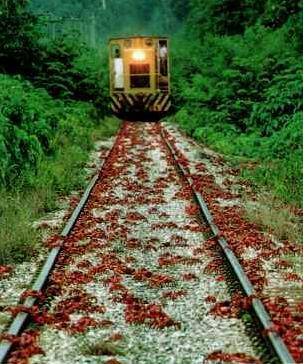 Traffic chaos caused by multitudes of migrating frogs, crabs (right) and other creatures is not at all unheard of but stopping a train in its tracks – literally – is a feat of Godzilla-esque group strength. Even Fu Jianguo, who's seen a lot over his long tenure with the railroad, was taken aback. “I’ve heard of caterpillars causing short circuits or stopping trains before,” explained Fu, “but have never actually seen such a thing.” Until now, Fu, until now. 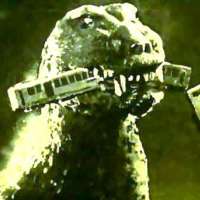 Unlike the proverbial chicken who only crossed the road to get to the other side, the Inner Mongolian caterpillars' mass movement has a simpler explanation: they were hungry.

It seems the cargo train was passing a grove of denuded apricot trees at the time of the event and, as the old story goes, the grass was greener on the other side. As messy as the incident was, it could have been worse... the caterpillars could have been carnivorous. (via AsiaOne News and Free Republic)

PetsLady's Pick: Amazing Sebright Chicken Of The Day
Keep Your Pets Safe On Halloween! The Animal Video Of The Day!!!
Adorable Clogs With Pet's Head On One Foot And Tail On Other
Comments