Developed by the New York-based primate advocacy group Orangutan Outreach, Houston was one of the first zoos in the country to participate in their "Apps for Apes" programs which uses iPads as a primary learning tool. Like their human evolutionary cousins, the zoo's chimps and orangutans are mesmerized by computer programs about themselves.

"While, they're not very interested in "pictures of building or architecture. . .iPad videos of other apes or on-screen magazines featuring ape photos are especially intriguing," noted the zoo's chimp keeper Helen Boostrom.

Now at 12 zoos around the world, the Milwaukee County Zoo and the Orangutan Outreach hope they will eventually be able use Skype for the primates to actually communicate with each other between zoos via the devices. With WiFi, the tablets will allow the apes to watch and Skype their compatriots, sort of like a "pixelized primate pen pal program." 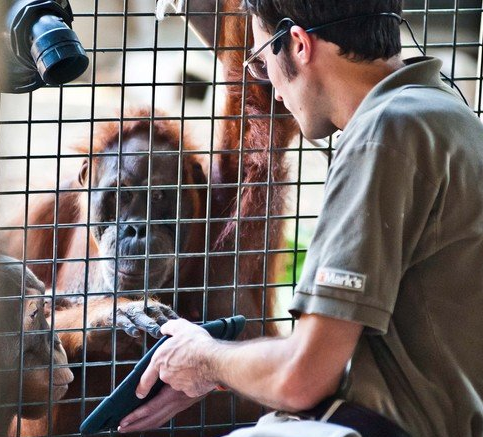 Chimps To Orangutans Make Monkeys Out Of iPads Before Skyping
However, it's important to note that we're still dealing with creatures of the wild  who can't really appreciate the technology behind the toy aspects of the iPad. The BBC reported that zookeepers are still hesitant about letting the apes handle the iPads, less they be thrown around a cage. "As soon as we hand them over to the orangutans, we figure the lifespan could be as little as 15 seconds - whether they meticulously take them apart or just snap them in half," said Richard Zimmerman, spokesman for Orangutan Outreach.

Some possible solutions to avoid these scenarios include developing a new protective case or affixing the iPad to a wall, where the image from the tablet could then be projected elsewhere for zoo visitors to watch.

"Orangutans love looking at each other," said Zimmerman, adding that one of the apes, 31-year-old MJ, is a fan of David Attenborough programs. "The orangutans loved seeing videos of themselves - so there is a little vanity going on," he adds.

If you have a gently used iPad that you’d like to donate to an orangutan, email the Orangutan Outreach group at info@redapes.org. First generation iPad are perfect for the orangutans to play with. The iPad 2s are camera enabled which just might make amateur photographers out of these primates. And when the next iteration rolls out, Zimmerman sees the price going down on the earlier ones. And it will allow for more people to donate their iPad 1's in favor of purchasing the latest model.

As a result of these experiments, there's a good number of monkeys now that think the iPad was made just for them. In a couple of years from now who knows how that will affect their evolution? 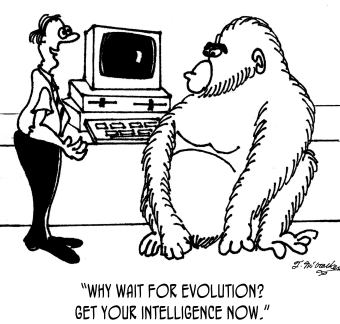 Want To See A Visual Metaphor Of My Life? The Animal Video Of The Day!!!

I Believe That I Have Now Seen Everything. The Tortoise With a Wheel Animal Video of the Day!!!

Terror Of The Angry Goat -- The Animal Video Of The Day!!!
Comments