Chimp Sues Master For His Emanicipation

Over the years, there's been legal cases where pets became the sole beneficiaries of their masters' fortunes. The most famous case in point is when New York hotel magnate Leona Helmsley (aka the "Queen of Mean") bequeathed the bulk of her $12 million estate to her Maltese dog, appropriately named "Trouble -- instead of any of her relatives. But up till now, a pet's legal rights is a nebulous area of the law where they literally have no say in legal matters. That was -- until Tommy the chimpanzee decided to sue his benefactors in a first-of-its-kind lawsuit.

It's been said that this primate endured a tedious life in the field of entertainment for over 16 years, where when not entertaining he was imprisoned in a cramped cage that didn't even allow him to stand -- a shelter that was so filthy, he was forced to "crawl and shuffle in his own waste," according to Jacqui Goddard at the Daily Beast.

It was there that Pat Lavery and his wife Diane from Gloversville, New York found Tommy and took him in. Having rescued many other chimps over the years, the Laverys were said to have provided the chimp with a definite upgrade in living accommodations - including a jungle play area, cable television, a stereo system, and an all-you-can-eat supply of fruits and vegetables. And it was there that Tommy resided for the last ten years.

Others do not see Tommy's lifestyle as idyllic as the Laverys portray it. According to attorney Steven Wise, president of the Nonhuman Rights Project, he doesn't believe that Tommy is living any better than he did during his entertainment gig. Wise feels that Tommy is illegally imprisoned and under New York law has the right to live a more "chimpanzee-like" lifestyle at a sanctuary.

Wise's lawsuit speaking on behalf of Tommy accuses the Laverys of holding the 26-year old chimp captive against his will. "They are detaining Tommy in solitary confinement in a small, dank, cement cage in a cavernous dark shed" at their property, the lawsuit says.

In response, Pat Lavery file back: "I've got 20 years experience with chimpanzees. We're not just some Joe Blow on the street who just happens to have a chimpanzee," Lavery said. "I've had animals all my life, horses, dogs reindeer. It's not a fly-by-night operation."

The lawsuit demands a writ of habeas corpus — essentially a document granting freedom — on behalf of Tommy the chimp, so he can be moved to an animal sanctuary, and in tandem the NhRP is also filing two other suits this week seeking asylum for three other New York Chimps.

While some will argue that chimps aren't human beings and as such don't have the same rights, others point

to the entitlement of "legal personhood," which underscores the fact that chimps share 99 percent of a human's DNA.

Chickens can be Pets too?

One of those most difficult questions in this case comes down to where to draw the line when it comes to animal rights. If a court case rules that chimps can recieve emancipation, than what about chickens? My grandma killed two of my pet chickens and served them up for a Sunday family dinner when I was a kid. Had I known I might have been able to take her to court -- perhaps some of my early toddler years wouldn't have been so traumatic! Your thoughts, readers? 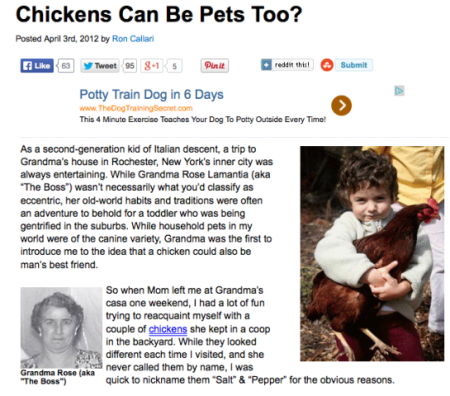 No Reindeer This Year -- It's Reindolphons!
Comments