Chew Chew: Where Humans Watch Their Pets Dine In Style 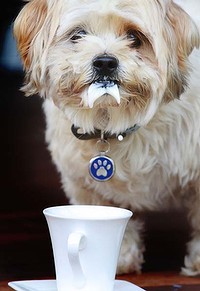 Enjoying a Doggiecino at Chew Chew's pet restaurant in Sydney: Photo: Ryan Osland in TheAge.com A few weeks ago, I wrote about a chain of gastropubs in Britain that have started to serve catered meals for dogs who accompany their owners to the pubs.  A decent thing to do, I thought, for dogs who would otherwise be taunted by all that yummy food the humans were eating.

But today's news tops that.  A pet restaurant in Sydney, Australia, serves organic home-made meals and Doggiecinos to dogs and cats, while their humans get to do the salivating.

Chew Chew opened its doors in June as a restaurant for dogs and cats, serving the healthiest of Japanese foods. Its restaurateur, Naoko Okamoto, is a pet nutritionist who serves only the finest organic ingredients to her pet clients. Organic chicken risotto, bolognese, minced chicken with coleslaw salad, and beefsteak with mushrooms are among Chew Chew's specialties.

And all the dogs love Chew Chew's Doggiecinos, frothed goat's milk cappuccino with a dash of dried liver treats.

Okamoto also caters meals for dogs and cats and has a home-delivery service in Sydney.  She also makes dog biscuits, organic soaps, and supplements, which she sells at markets and on-line.

Okamoto has seen how much healthier her clients become on her diets.  As an example, she told Sydney newspaper, The Age, about Cuba, a dog who's owner was told to amputate his leg or he would die from bone cancer within a year.  Long after a year, Cuba is still alive "with all four legs."

"Food makes cells and cells make up the body" she told The Age. "It cannot cure cancer but it definitely helps a lot."