Cheetah Tries To Make A Meal Out Of Meeting Adam Sandler

Comedian and actor Adam Sandler was on vacation in Africa with his family
when he nearly had what could have been a fatal encounter with a wild
cheetah -- and that's no joke. He told the tale of his wildlife
adventure during an appearance on David Letterman on Wednesday night --
and had the video to back up his story. Fortunately the cat 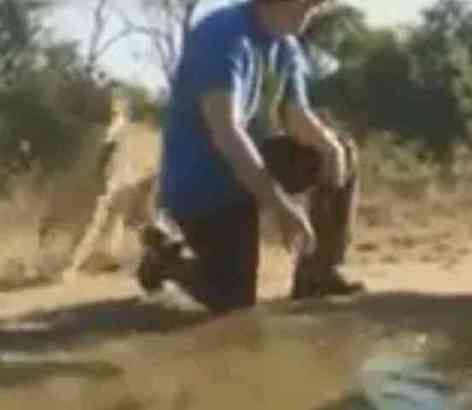 Adam Sandler bends down to get water to give the cheetah. (You Tube Image) did not
catch a falling star.

Sandler, who was on Letterman plugging his latest movie, related the tale of his harrowing experience to the late-night host of the Late Show. Guides on the private safari had told him that he could give the cheetah water from his hand.  Intrigued by the offer, he knelt down to the watering hole to fill his hands with water.  Rookie mistake.

With his back to the cheetah and bending over to the water he had created a perfect target. Nature being what it is, the big cat suddenly saw prey right there before it. So the cheetah tried to make the most of the opportunity. 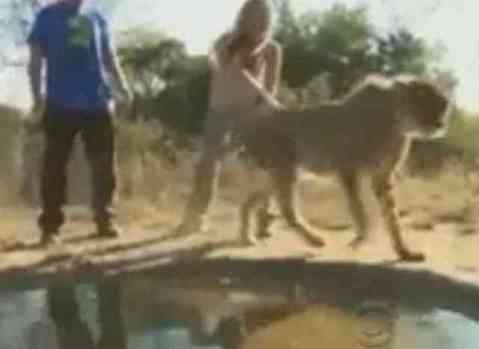 The cheetah, having had his fun, is sent on his way. (You Tube Image)Sandler's adrenalin level was through the roof when he felt the animal leap at his back. He had been suffering from a stiff neck that day so his first thought was of the pain he felt there. Then he realized what was happening and was certain that the end was near and had no plans to fight back. He thought, "This is how I'm dying. That's great."

Fortunately the guide quickly pulled the cat off of Sandler. It didn't seem that the cat's heart was really in its pounce because other than a major adrenalin rush and some stress to his sore neck, he came away unscathed. Chances are if the cheetah had been really serious Sandler would be telling this story from a hospital bed.

One thing is for sure, Sandler did not get "cheetahed" out of a great story to tell. (Insert groan here.)