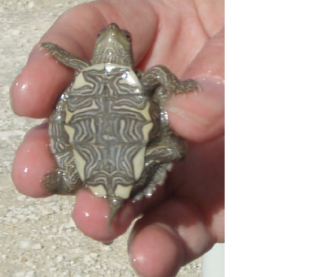 The sale of small turtles have been banned in the U.S.: image via CDCThe Center for Disease Control (CDC) issued new warnings on February 3, 2012 that underlined the danger of keeping small turtles, frogs, and reptiles as pets.  They carry salmonella.

The sale of small turtles with shells less than 4 inches long has been banned by the FDA since 1975, but many pet stores and flea markets still sell them.  Salmonella bacteria thrive on the exteriors of theses turtles, as well as frogs, salamanders, lizards, and snakes and and the bacteria are all over their habitats as well.

Serious complications and even death can result from even touching a contaminated amphibian or reptile.  Those most likely to be infected are children under 5, the elderly, and anyone with a compromised immune system.

Symptoms of salmonella poisoning include nausea, diarrhea, fever, stomach pain and headache.  They may appear within 2 to 72 hours after contact and may last for 2 to 7 days.  Some become so sick they must be taken to the hospital for treatment.

The CDC advises owners of pet reptiles or amphibians to remove them from the homes of newborns, small children, the elderly, and the sick.  Additionally, one should wash hands thoroughly after touching these pets and should wash their habitats outside of the kitchen, using bleach to disinfect them.

Hey! There's A Spider On Your Cuff!