Tashirojima, a small island in Ishinomaki
City in Japan, is home to more cats than humans. The island's love 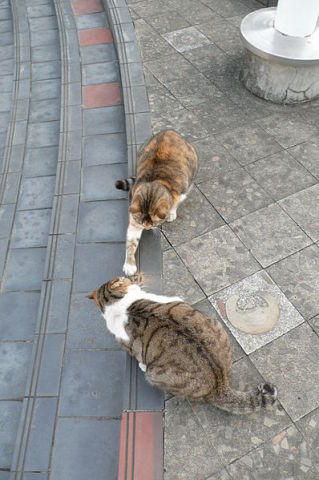 Cats outnumber people on Tashirojima Island in Japan
affair with the felines began many centuries ago when cats were
established in residence to deal with the rodents that threatened the
farming of silk worms. Because of their good work, the cats became known
as bringers of good luck and fortune. In the center of the island is a shrine to the precious pusses.

Late
in the 19th century the livelihood of the human population turned from
silk to fishing, which suited the population of semi-domestic cats just
fine. They enjoy spending time at the docks begging fresh fish scraps,
which they got --- and still do. The fishermen believe that watching the
cats will predict the weather and forecast fishing conditions.

Over
the last 50 years the human population of this tiny island along the
northeastern coast of Japan has dropped by 90% to fewer than 100 people.
Nearly all of these people are over 60. The survival of the island is
considered to be threatened. The cat population is doing very well,
however.

Many people help care for the cats. One lady offers a
daily breakfast of rice and eggs, and her cooking must be good, for the
cats line up at her door to be served the tasty dish.

In Japan,
many smaller communities will promote any quality that would distinguish
them among the larger, more important cities. Tashirojima shows off and
celebrates their cats. Daily ferries bring tourists to the island to
visit the cats. The people have even erected cat-shaped buildings as
inns and outbuildings to enhance the theme.

On
May 11, 2011, when the earthquake and subsequent tsunami hit, the
residents of Tashirojima, both people and cats, were lucky. The
inhabited areas of the island are higher in elevation than the wave that
hit. While there was still a lot of damage from the quake, everyone
survived. It was a precarious 11 days before helicopters arrived with
desperately needed supplies.

In the aftermath of the disaster,
people from all over Japan were so moved by the story that they donated
millions of yen to the islanders. The fund was lovingly called "The Meow
Project." The islanders have not yet decided how to use the funds.