Cats In History: Kiddo Attempts To Cross The Atlantic

In the early years of the 20th century the Western World was becoming
obsessed with the idea of air travel. Before the advent of
heavier-than-air craft that led to aviation as we know it today, people
traveled by airship. One small gray tabby cat, named Kiddo, was
included in the crew of the airship America on its attempt to be the
first of 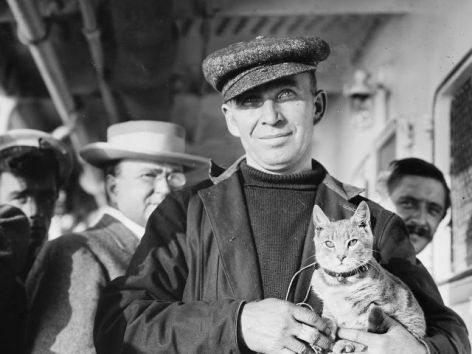 Kiddo and the ship's engineer Melvin Vaniman just after the rescue. (Public Domain Image)its kind to cross the Atlantic Ocean.

Kiddo was not the first cat to become airborne. That honor went to a cat whose name has been lost to history when it was included in a hot air balloon flight some 130 years prior to the flight of the America.

The cat had been a stray living in the hangar, in Atlantic City, New Jersey, with his twin brother. Unfortunately, just a few weeks before the launch of the America, Kiddo's brother was killed by a wolfhound. Kiddo had not been a part of the original plan. He was scooped up at the last moment on October 15, 1910, by the airship's navigator, Murray Simon, and tossed into the lifeboat that was just under the airship and where the radio man, Jack Irwin, had his post. Kiddo spent much of the voyage curled up in the "wireless corner."

Not everyone was in agreement with Simon's sailor superstition in including a cat on a ship for a trans-Atlantic crossing, especially once the cat freaked out about his first flight and was tearing around the ship like a maniac. This led to the first, and notably historic, radio message sent from an airship: "Roy, come and get this goddamn cat!"

Despite Simon's protests that the cat was lucky, Kiddo was stuffed into a canvas bag to be lowered to the motorboat that had just towed the airship away from land. The weather was bad and the sea had grown rough so the motorboat was unable to reach the bag. After getting dunked unceremoniously into the sea, Kiddo was finally hauled back up and accepted by the crew. He regained his dignity and composure.

The cat was able to predict trouble ahead of time and Simon wrote in his log that the animal was "better than a barometer." When Kiddo was faced with foul weather he did tend to lose his gentlemanly demeanor. At those times he was put in a hammock and covered with a blanket which would calm him down. 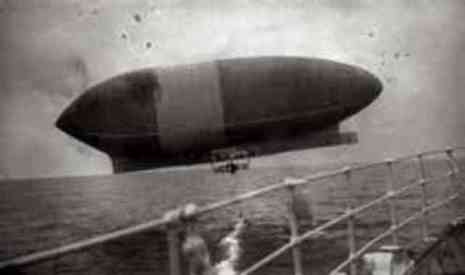 The airship America as seen from the resuce steamship Trent (Public Domain Image)The full Atlantic crossing was not meant to be for Kiddo and the crew. After storms and engine trouble they eventually had to ditch the America and take to the lifeboat. From there they were rescued by the British steamship Trent which was en route from Bermuda to New York.

After the rescue Kiddo enjoyed some celebrity time, including being on display at Gimbels department store in a gilded cage filled with comfy pillows (and hopefully a litter box). He retired from aviation and public life to become a proper kitty.

Less than two years later, in July of 1912, a cat named Whoopsy managed what Kiddo had not been able to and made it all of the way across the Atlantic -- as a stowaway. He had been smuggled on board the British airship R-34 by a human stowaway, William Ballantyne. The tiny tabby ended up remaining on the airship as the ship's mascot until it crashed in 1921. The only injury from the crash was to Whoopsy, who suffered a bruised paw.