Cats And Cows: A Love Story

Cats and cows are two animals that don't seem to be all that likely to
end up as friends -- other than the obvious attraction of milk. Yet it
seems to be fairly common for the two to become best buddies. A story
that has been 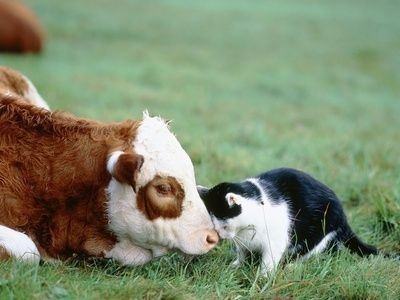 Cat and Cow Cuddle (Photo via Pinterest)floating around the internet for quite a while shows how a
stray cat on a kibbutz in Israel found the love and companionship it
needed in the form of a friendly calf.

While most cats have a strong love of cow's milk, milk doesn't love them. Like many humans, they tend to be lactose intolerant and the tasty treat is likely to give them stomach upset and diarrhea. As with humans, cats lose the enzyme lactase as they grow older, and become less able to digest lactose. So all those cute pictures of cats that illustrated your favorite stories as a child were just as fictional as the tales they accompanied.

Cows, which are numbered among the most dangerous animals in America, seem to be a favorite farm animal for 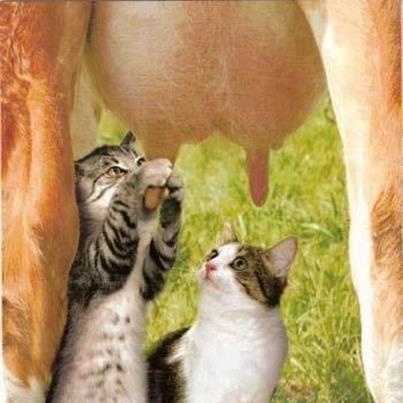 "How do you turn this thing on?" (Photo via Pinterest)cats -- even without the promise of fresh milk. Perhaps the two are attracted to the smell of one another. Perhaps they just get together to tell stupid human jokes. I don't know.

The daily ritual for the stray cat on the kibbutz (communal farm) in Israel is to stroll over to the calf barn after breakfast to visit his favorite calf. They share muzzle nuzzles and the cow will lick the cat all over much the way a mama cat will care for her kitten. While the cat isn't always in the mooooooood for such ministrations, when he is he will walk away soaking wet, but happily well-loved.

A quick look on You Tube turned up numerous videos of cats and cows engaged in affectionate activity. The cats perform their best flirting moves that we all know and love. Invariably at some point in the conversation that freakishly big cow tongue comes out and begins to lick the felines gently and lovingly. In one of the videos a cow even jockeys for position among the herd to get close enough to her pussy paramour. Watching it is a totally mooooving experience.

Perhaps the animals had known each other in a past life and were just reconnecting. More likely is that the cows find cat fur as nice and pleasant as we do and licking is the closest thing they can do to petting. For cats licking is a sign of love and acceptance. In cat view a cow's tongue means a whole lotta lovin'.

The cat/cow conundrum (or cow-nundrum) has most likely gone on for the same thousands of years that we have been trying to figure out the felines who chose to share our lives. Cats seem willing to make friends with all sorts of other animals -- as long as it is their idea. I have seen my own kitty enjoying the company of deer, squirrels, and even a cautious nose-to-nose greeting with a skunk. Undoubtedly, she would number a cow among her friends if we lived in the country.

PetsLady's Pick: Cute Curmudgeon Cat Of The Day
Silver Spoon Sundays: Turning Your Gem Of A Pet Into A Jewel