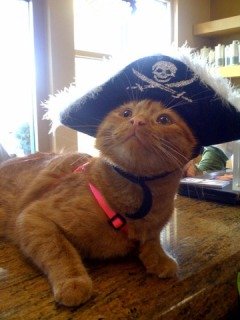 Wilma, 3-legged pirate cat, one of 13 Ravishing Rescues from the 2012 Calendar: image via 360photocontest.comYour rescued cat  is naturally photogenic. Let's face it; all cats are. So sharpen your photographic skills and get your darling 'ravishing rescue' poised and posed to enter the 2013 Ravishing Rescue Calendar Photo Contest sponsored by the Stray Cat Alliance and VCA Charities.

The 2013 Ravishing Rescue Calendar celebrates the Stray Cat Alliance's twelfth year of success providing advocacy, rescue, medical care, and adoption services for homeless cats in Los Angeles.  The Stray Cat Alliance has served thousands of cats in its no-kill shelter all this time, and it is recognized as a leader in public education and care for homeless cats.  The photo calendar is a means for this non-profit agency to raise public funds.

Here's the gist* of how the contest works.

1. Anyone in the U.S. can submit your cat's or cats' photos to the contest in JPEG, JPG, PNG or GIF format. Submit as many photos as you want; submissions are free.  Make sure, however, in case you win, that you will be able to submit an original photo that is at least 3648 pixels X 2736 pixels @ 72 dpi, and preferably 300 dpi, in size.

2. Your cat's photo(s) is posted on the contest website and the public gets to vote on it and the other photos submitted to the contest.  Votes cost $1 each, but the minimum vote purchase is $5, and additional voting blocks are in multiples of $5.  You can use all your votes for one cat photo or spread them out.

Baby, found in a bale of hay, Ravishing Rescue winner in 2012 Calendar: image via 360photocontest.com 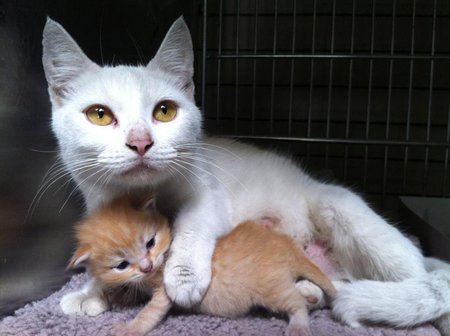 Lily and her baby, foster cats, number one photo 2012, Ravishing Rescue cover girl.: image via 360photocontest.com
The 'ravishing rescue' with the most votes (get everyone you know to the Contest site to vote!) gets on the cover of the calendar, and the other 12 top ravishing rescue cats get to be the calendar cat of the month for January through December, 2013.
There are already hundreds of ravishing cat entries at the contest site; go vote and save another kitty's life!
*The above is a very short summary. The complete rules are listed here. Read them carefully.

Cat Versus Cat Balloon! Who Will Reign Supreme? The Animal Video of the Day!!!
A Paradise In Hawaii For Cats
Keeping Up With The Kattarshians! Wait! What?